Smartglasses, smartwatches, and activity-tracking wristbands: Consumers might not be buying them up, but early adopters might come from another place -- the workplace.

Salesforce.com is betting on it. And the company has been quietly growing its platform for developers who want to build wearables apps for the enterprise. In June, Salesforce.com announced Salesforce Wear, a platform for developing apps for six wearable device types, including Google Glass and the Samsung Gear 2 smartwatch. Semiconductor and software design company ARM is also a partner in the Salesforce Wear ecosystem.

[Salesforce.com has learned a lot from Facebook, and it shows in its enterprise apps. Read 4 Ways Salesforce.com Likes Facebook.]

On Thursday the company announced it has added five wearable devices to its Salesforce Wear product line: 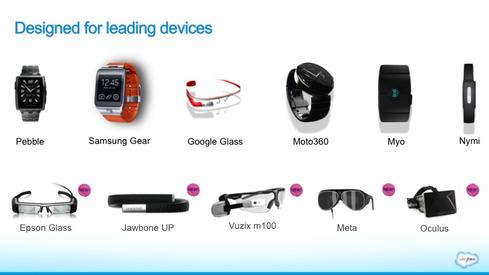 The heart of Salesforce Wear is a collection of open-source reference apps -- called the "Salesforce Wear Developer Pack" -- that helps developers build wearable apps that connect to the company's Salesforce1 mobile app platform. Previously, developers in the wearables space could build prototypes, but they were not connected to an official platform. The "reference apps" within Salesforce Wear provide examples of how Salesforce built apps for the aforementioned wearable device types. The company makes the code open source for developers to learn from and then use to build their own enterprise apps.

There are now 1.5 million developers working in the Salesforce Wear platform, 2,500 ISVs, and 100,000+ customers in total, according to Daniel Debow, SVP of emerging technologies at Salesforce.com.

Debow says he's aware that the wearables market is still trying to find an audience. The company's hope when it released the Salesforce Wear platform was that it could exploit Salesforce's huge developer community to get enough people and software companies to look at the reference apps for inspiration and opportunity.

"And we've seen that happen more than we anticipated," says Debow. "ISVs have jumped on and built apps."

The ISVs developing wearables apps via Salesforce Wear are mostly young companies, or even startups, in the retail, healthcare, and field-service industries. Here are three notable examples of wearables apps developed using Wear that are now available on the Salesforce AppExchange:

APX Labs. Through a mix of the Skylight Platform, Salesforce Wear, and smartglasses makers, the APX-Labs app allows field workers such as telecom service technicians or utility workers to quickly log a case in the Service Cloud database while they continue to work.

2lemetry. With the connected SafetyCare wearable device, senior care patients living at home can swipe across the screen of a wearable device to request immediate assistance.

Brivo Labs. Brivo Labs' identity access management app, called NthID, works with the Bionym Nymi wristband or a smartwatch to control access of employees to both laptops and physical spaces. The app identifies the wearer by the unique rhythm of his or her pulse.

Forrester vice president and senior analyst J.P. Gownder, who watches the wearables space closely, says Salesforce.com is showing good foresight by creating and expanding a developer platform for a "long-tail" market like wearables. "They've future-proofed things in a way by making Salesforce Wear work with a variety of hardware," he says. "If, say, the Pebble watch fails, you'll still have options as a developer."

Developers do not have to pay to use Salesforce Wear. They can sign up for a free Developer Edition to test the reference apps and review the code. However, if they wish to build and release an app for production use based on any of the reference apps, they must be a paying Salesforce1 customer.

Salesforce Wear Developer Pack is generally available at http://developer.salesforce.com/wear and is included with all user licenses of Salesforce CRM and the Force.com platform.

Shane O'Neill is Managing Editor for InformationWeek. Prior to joining InformationWeek, he served in various roles at CIO.com, most notably as assistant managing editor and senior writer covering Microsoft. He has also been an editor and writer at eWeek and TechTarget. ... View Full Bio
We welcome your comments on this topic on our social media channels, or [contact us directly] with questions about the site.
Comment  |
Email This  |
Print  |
RSS
More Insights
Webcasts
[Virtual Event] Doing More IT With Less
5 Ways to Jumpstart AI
More Webcasts
White Papers
Getting The Right Cloud Management
What is NDaaS?
More White Papers
Reports
An Insider's View into a Supply Chain Attack
The Definitive Guide to Managed Detection and Response (MDR)
More Reports

Interesting article...I predict Salesforce will announce purchase of Fitbit at upcoming 2014 Dreamforce, which strengthens SFDC enterprise wearable intentions with established product and user base and gives Fitbit an out to escape their activity device functionality being subsumed by smartwatches and smartphones.
Reply  |  Post Message  |  Messages List  |  Start a Board

@Shane, great point. Since a long time, I have been wondering about consumers and wearable devices, and how an aggregated consumer is expected to upgrade a $300 wearable device with X number of sensors  and limited app availability, with another $300 wearable device with X+1 number of sensors and a marginal increase in app availability. In the workplace, these concerns a replaced with promising possibilities. For example, if APX Labs can help a telecom service technician to increase efficiency by even 5%, then $300 and subsequent, upgrades costing another $300 -- delivering another boost to efficiency, won't be too hard to justify.

This is why I feel, that wearable devices might turn out to be like the PDAs, finding their success first in the enterprise and later at the consumer end.
Reply  |  Post Message  |  Messages List  |  Start a Board

I think he'll go all in: Oculus Rift headset on, the Nymi and Jawbone wristbands on one wrist and a big honkin' Samsung Gear 2 smartwatch on the other wrist.
Reply  |  Post Message  |  Messages List  |  Start a Board

I wonder which wearable Marc Benioff will wear onstage at the upcoming Salesforce Dreamforce conference. Just might upstage his shoes or socks (and those are both areas in which he likes to make fashion statements.)
Reply  |  Post Message  |  Messages List  |  Start a Board
Editors' Choice
Hot Topics