Research In Motion began shipping today its long-awaited BlackBerry PlayBook. After eight months of tease, a few weeks of delay, and a week of flogging by reviewers with early access to the device, there's no turning back.

Were it not for the enormous, Apple-induced pressure on RIM to produce a tablet, it would have -- and should have -- delayed further. Crucial features, namely desktop connectivity and the infamous Blackberry Bridge software that provides messaging and scheduling, are only half baked. It all works, but with too many end-user sacrifices.

InformationWeek has posted a full review of the PlayBook, and an image gallery of a PlayBook teardown, courtesy of UBM TechInsights, our sister division, which has helped us get inside many similar devices lately. In side-by-side videos, we will also compare the PlayBook's speed with the speed of iPad 2 and Motorola's Xoom Android tablet.

After several days of testing, we found plenty to like about the PlayBook. The user interface is the most intuitive of any tablet operating system, borrowing from Hewlett-Packard's WebOS, Apple's iOS, and RIM's own BlackBerry Torch touch interface. The browser scored highest by a mile on my HTML5 fidelity tests on www.html5test.com. For another take on the PlayBook's performance, especially its HTML5 fidelity, read Sencha's hands-on test results. The device is extremely fast, and its Flash support is excellent -- I tested with the BrightCove video content management system console, written in Flash and inaccessible from Apple's iOS. Android 3.0, running with the latest version of Flash, couldn't hold a candle to the PlayBook here.

The PlayBook has a first rate video camera, as well as the ability to bring iTunes files into its music app. From a developer and enterprise standpoint, there are a plethora of options for applications, especially application portability. I will dive deeper into those in a future article. 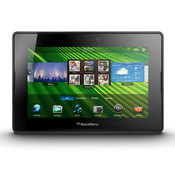 But the problems obliterate any of the PlayBook's yum factor. It's downright embarrassing. First, there are two ways to connect the PlayBook to a PC or Mac. To simply connect, just use USB, which installs a driver. After disconnecting (on the PC, or restarting on the Mac, where you also have to make sure it's a "trusted" device in your network preferences) and re-connecting, you're on your way. The Playbook shows up as a network drive -- and from here you can sideload content.

Simple enough, but this did not work -- the drivers did not install, and the options simply weren't available.