The compact smartphones, aimed at the consumer market, are the first to support the Wi-Fi 802.11n standard. 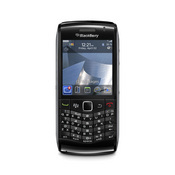 Research in Motion announced Monday a compact pair of Pearls: the BlackBerry Pearl 3G 9100 and 9105 are the smallest BlackBerry handsets yet. The smartphones were introduced at RIM's 2010 Wireless Enterprise Symposium (WES) event in Orlando.

The new Pearl 3G models measure less than two inches wide and weigh 3.3 ounces each. They pack many of the same features found in RIM's other 9000 series BlackBerry devices. Both feature a high-resolution 360 x 400 pixel display and a 624 Mhz processor with 256 MB Flash memory

Mike Lazaridis, president and co-CEO of Research In Motion, touted the Pearl 3G as being "unlike any other smartphone in the world," and said, in a statement, that the device "allows consumers to upgrade their traditional mobile phone to a full-featured, easy-to-use and fashionable 3G BlackBerry smartphone that supports BlackBerry Messenger and many other apps while maintaining a handset design and layout that is familiar and comfortable."

Both phones run on BlackBerry OS 5 and support tri-band UMTS/HSDPA and quad-band EDGE/GPRS/GSM networks. They are the first Blackberry smartphones to support Wi-Fi 802.11 b/g and 'n'.

The handsets feature an optical trackpad for smooth navigation, as well as dedicated volume and media keys, a 3.2 MP camera with flash, and support for up to 32 GB of personal content.

The devices share all features except for their keypad layouts. The 9100 model features a 20-key condensed QWERTY keyboard, while the 9105 has a more traditional 14 key alphanumeric layout instead of RIM's proprietary thumb-centric keypad design.

"The Pearl is very clearly aimed at the consumer market, [at] people who want the caché of the BlackBerry brand, said Charles Golvin principal analyst at Forrester Research. "RIM's growth in the past two years has focused more on the consumer market than the enterprise market," he said, adding that this is also evident in RIM's advertising.

The two BlackBerry Pearl 3G models are powered by a 1150mAh battery that is rated for 5.5 hours of talk time on GSM/EDGE and HSDPA 3G networks. RIM says the two devices are expected to be available for purchase in May, though no carrier partners or pricing have been announced at this time.