Microsoft and its handset and network operator partners aren't wading slowly into the waters with just one new Windows Phone 7 handset. Instead, they are going all out, with AT&T alone fielding three of them: from HTC, LG and Samsung.

Each of the three offers a unique and compelling hardware experience. With three hardware profiles, the user gets plenty of choice to find out what works best for him or her.

Microsoft isn't allowing its handset and carrier partners to customize the user interface too much. That means the software experience of the HTC Surround, LG Quantum and Samsung Focus is nearly identical. Since the user interface is shared among the three, let's save that for last.

Overall Feel: With its pop-up stereo speakers, the HTC Surround is less focused on the business user and more appropriate for those interested in a great media experience. It is the heaviest of the bunch and suffers a bit from too much specialization on one feature. 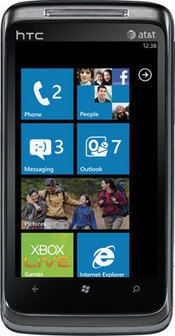 It is thicker and heavier than other touch phones with similar screen size thanks to the sliding form factor that delivers up two stereo speakers. In order to facilitate desktop movie viewings, the Surround has a kickstand on the back to hold it up and position the screen at a good viewing angle. (This works for PowerPoint presentations, too.) The kickstand doesn't feel as flimsy as it does on other devices, but I still worry about its longevity.

The other buttons and controls on the Surround function as they should, and Microsoft has mandated several features for the hardware. All Windows Phone 7 devices have to have a Back, Home and Search key below the main display, and they must be in that order. The Surround uses capacitive keys that provide haptic feedback (small vibrations) when pressed. The WP7 also must have a dedicated camera key.

Perhaps one of the best features is that pressing and holding the camera key unlocks the phone and launches the camera. The Surround's hardware has a good feel to it, and quality of materials and manufacture are top-notch. The lack of a physical keyboard might be a turn-off to some, however.