Google Translate for Android smartphones offers a unique and compelling new capability. This beta feature, called Conversation Mode, makes it possible to carry out a person-to-person conversation and have the Android device translate and speak each piece of the conversation on the fly. This new conversation model feature only works for conversations between English and Spanish speakers, though the main Google Translate app supports a wide range of languages for standard phrase-by-phrase translat 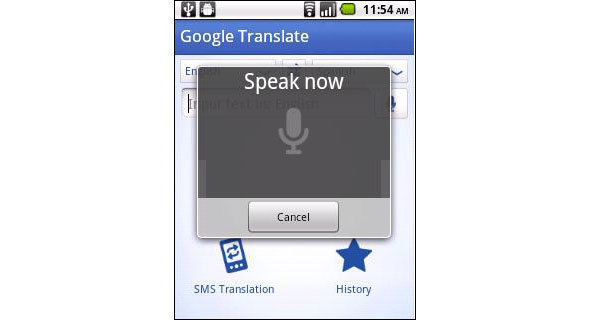 Currently, Google Translate is only available for smartphone's or mobile devices that are based on the Android operating system. The Google Translate app can be found in the main Android Market, where the free app can be downloaded and installed. Using Google Translate is as simple as firing up the application on your Android device. The app won't work offline so your Android device will need some form of Internet connection, either a Wi-Fi connection or a 3G connection. In tests, both worked well. To start a conversation in Google Translate, first set the translations to English and Spanish (which are the only languages currently supported in Conversation Mode), and then simply press the microphone icon next to the text input field and begin speaking. Google Translate will convert the phrase into a digital waveform and show a potential translation.