Polyera, a largely unknown startup, is making a splash with its Wove Band, a wearable device with a flexible display that can be wrapped around a user's wrist.

Flexible electronics specialist Polyera announced the debut of its first commercially available product, the Wove Band, on Monday. It's a flexible display that can wrap around a wrist or be used flat.

The platform on which the Wove is based, called Digital Fabric Technology, is the result of 10 years of development, spanning science, engineering, and design, according to the company's August 17 release.

On a website devoted to the device, which leads users to various social media pages, the company notes submissions for free Wove 0.1 prototypes open in September, asking curious parties to check back in 42 days.

Another component used in the Wove Band is E Ink, a flexible electronic ink film made of plastic-based thin-film transistors (TFTs). These TFTs make the end product lighter and thinner than products using glass-based TFTs.

The bi-stable nature of E Ink's electronic ink makes it so displays do not consume energy while holding a static image. This approach enables the Wove to have a display which is both large and always-on, while consuming less power than smartwatches with smaller displays. 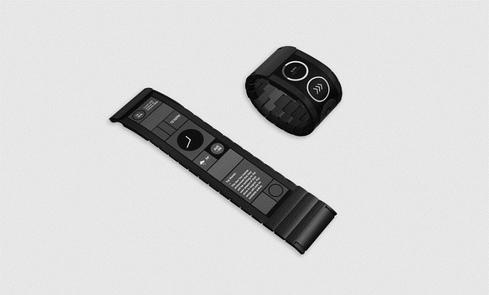 At a basic level, a display is made up of two parts: The first is a frontplane, which is the layer that makes the image you see. The second is a backplane, which is an array of TFTs that control which pixels in the frontplane turn on and off.

With Polyera Flexible TFTs, the backplane can be made flexible, making the full display flexible, in contrast to traditional display technologies where the backplane has previously been a constraint.

"Most attempts to make flexible displays have relied on depositing traditional electronic materials, such as silicon, on plastic substrates," the company explains on its website. "This approach allows the creation of products with displays in a fixed curve, but the brittleness of these electronics layers makes them unsuitable for products which are dynamically flexible. Polyera's proprietary materials, by contrast, are flexible and robust, enabling the creation of products with true, dynamically flexible displays."

The company is also working on a variety of flexible electronics components, such as flexible OLED displays, flexible sensors and flexible logic circuits.

Polyera is led by CEO Phil Inagaki, who founded the company after graduating from Princeton University with a degree in physics, and Antonio Facchetti, co-founder and chief scientific officer, who holds a Ph.D. in chemistry from the State University of Milan.

The company is far from the only player in the flexible display space. Consumer electronics heavyweights LG and Apple have also made investments in the technology. LG is spending nearly a billion dollars to build a flexible OLED plant in Korea.

In 2014, Apple was awarded a patent for a flexible display as part of a series of 57 newly granted patents doled out by the US Patent and Trademark Office.

Nathan Eddy is a freelance writer for InformationWeek. He has written for Popular Mechanics, Sales & Marketing Management Magazine, FierceMarkets, and CRN, among others. In 2012 he made his first documentary film, The Absent Column. He currently lives in Berlin. View Full Bio
We welcome your comments on this topic on our social media channels, or [contact us directly] with questions about the site.
Comment  |
Email This  |
Print  |
RSS
More Insights
Webcasts
Optimizing App Performance in the Cloud
Cybersecurity's Next Wave: What You Should Know
More Webcasts
White Papers
Why Add Security to Your Skill Set and How to Do It
Sunburst: Impact and Timeline
More White Papers
Reports
Are We Cyber-Resilient? The Key Question Every Organization Must Answer
Special Report: Edge Computing: An IT Platform for the New Enterprise
More Reports
Copyright © 2021 UBM Electronics, A UBM company, All rights reserved. Privacy Policy | Terms of Service