The company's CEO Eric Migicovsky confirmed in an interview that Pebble is laying off 40 people -- about a quarter of its workforce. This comes despite a fairly successful run as a smartwatch maker.

The CEO of smartwatch startup Pebble said in an interview that the company is planning on laying off a quarter of its workforce -- about 40 people in total -- despite its success in the market.

Eric Migicovsky told Tech Insider in a March 23 interview that Silicon Valley's recent financial restraints are to blame for the cuts, even as the company has successfully raised $26 million from investors, in addition to a successful Kickstarter campaign to fund production of its smartwatches.

"We've definitely been careful this year as we plan our products," Migicovsky told Tech Insider. "We got this money, but money [among VCs in Silicon Valley] is pretty tight these days. Pebble is in this for the long haul. We have a vision where wearables will take us in five to 10 years, and this is setting us up for success." 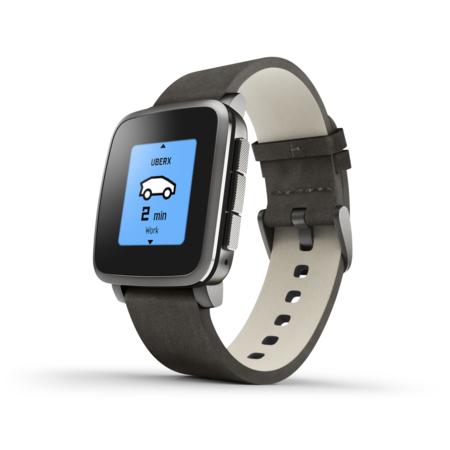 In addition to disclosing the layoffs, Migicovsky announced plans to partner with Amazon.com in India to sell its devices there, and said the company plans to focus more on the health and fitness capabilities of its devices, which he said customers appear to be most interested in.

Featuring a color E-Paper display and up to seven days of battery life, the $200 Pebble Time features a timeline interface which turns information like notifications, calendar events, weather, sports scores, breaking news, and missed calls into pins that let users see what's ahead or catch up on what's already happened.

The Time, which connects to both Google Android smartphones and Apple's iPhone, is water resistant up to 100 feet and is compatible with activity-tracking apps from Jawbone, Fitocracy, Runkeeper, and Misfit.

The company also markets the Pebble Steel, which includes the steel frame and leather band and costs $249.

Right now, Fitbit, with its fitness devices, and Apple, thanks to the Apple Watch, are dominating the wearables market. However, Apple recently dropped the price of the Watch by $50, a potential indicator that the device isn't selling as well as Apple hoped.

Wearable electronics sales are projected to reach 274.6 million units in 2016, according to a February report from Gartner.

Gartner researchers forecast an 18.4% jump in wearable shipments from 232 million units sold in 2015. The market will drive $28.7 billion in revenue in 2016. Of that total, $11.5 billion will come from smartwatch sales.

"Smartwatches have the greatest revenue potential among all wearables through 2019, reaching $17.5 billion," Angela McIntyre, research director at Gartner, wrote in the report. "From 2015 through 2017, smartwatch adoption will have 48% growth largely due to Apple popularizing wearables as a lifestyle trend."

A report earlier this month from IDC also shed some light on why consumers are purchasing smartwatches -- and some responses were surprising.

While some consumers are drawn to the technical capabilities of the devices, fashion plays a big part in the decision to purchase a smartwatch. Specifically, 81% of those polled said they are conscious of how they present themselves, 77% said how they dress is important to them, 66% said their clothing is an expression of self, and 63% said the accessories they choose speak volumes.

Nathan Eddy is a freelance writer for InformationWeek. He has written for Popular Mechanics, Sales & Marketing Management Magazine, FierceMarkets, and CRN, among others. In 2012 he made his first documentary film, The Absent Column. He currently lives in Berlin. View Full Bio
We welcome your comments on this topic on our social media channels, or [contact us directly] with questions about the site.
Comment  |
Email This  |
Print  |
RSS
More Insights
Webcasts
People Are The Most Important Part of Autonomous SOC
Nip Ransomware in the FUD: Detecting Attacks Pre-Encryption
More Webcasts
White Papers
How Secure Are Your Endpoints?
10 Must-Have Capabilities for Stopping Malicious Automation Checklist
More White Papers
Reports
Building the SOC of the Future
The Malware Threat Landscape
More Reports