50%
Tweet
To make the new MacBook Pro as thin and light as possible, Apple made it almost impossible to repair and very hard to recycle.

The new MacBook Pro with Retina Display is unfixable and un-upgradable. It is held together with glue.

According to a Wired blog post by Kyle Wiens, iFixit's CEO, iFixit took apart Apple's latest MacBook Pro with Retina Display and revealed the machine "is the least repairable laptop we've [iFixit] ever taken apart..." Wiens went on to say that upgrading components such as RAM and the solid state drive is impossible. Further, the battery can't be replaced without mailing the machine back to Apple and footing a hefty repair bill and the display isn't designed with repairs in mind.

Apple fused the LCD to the display assembly--the hinged part that flips open. It also contains the iSight Camera, and Wi-Fi and Bluetooth antennas. If any of those components break--including the screen itself--the machine will need a brand new display assembly. None of the articles gave an exact figure for the replacement cost, but they both said it would be expensive. 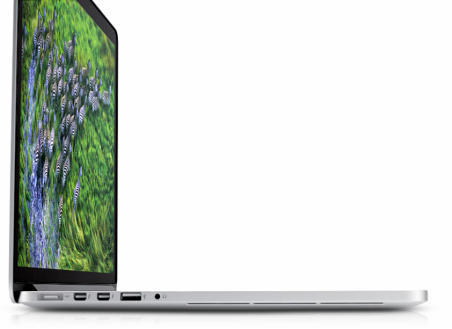 The design philosophy that inspired the display also influenced the rest of the machine. According to iFixit, the machine's innards are sealed with a stack of Apple's proprietary Pentalobe screws, the same ones that were on the MacBook Air. That means you need a special screw driver just to get the thing open (iFixit did have that tool available here).

Once it's open, the machine starts to look more like a middle-school shop project than a modern design marvel. The battery is glued in place, according to iFixit, who couldn't get it out because of the stubborn glue. The new design also has the battery covering the trackpad cable. Removing it forcibly might damage the trackpad.

The new battery is expensive and owners must ship the machine back to Apple and shell out $200 for a replacement. According MacRumors, a MacBook Pro battery lasts about five years with typical use.

More upgrade challenges emerged once iFixit dug more deeply. Wiens reports that the RAM is soldered onto the logic board, meaning the machine's maximum amount of RAM is set at purchase. That can be a serious problem for any machine's longevity, in my experience. Upgrading an aging computer's RAM is one of the easiest, cheapest ways to get better performance.

Finally, the solid state drive isn't upgradable. At least not yet. According to iFixit, "It's a separate daughter-card, and we're hopeful we can offer an upgrade in the near future." There's no official timeline from Apple about if and when SSD upgrades will be available. No third-party manufacturers have made an announcement yet either.

These problems for consumers are just the beginning according to Wiens' Wired post. "The design pattern has serious consequences not only for consumers and the environment, but also for the tech industry as a whole," he wrote. According to his friends in the recycling industry, the glass-glued aluminum isn't recyclable, said Wiens. 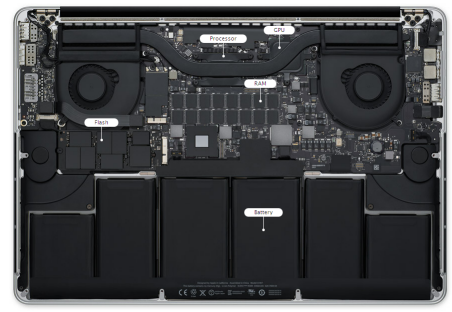 The glue might or might not be such a problem. Richard Karnesky, senior materials scientist at Lockheed Martin, wouldn't comment on the specifics of the Apple machine's glue but said that the fused design doesn't necessarily negatively affect the recycling options. "... depending on the adhesive method, the devices can be disassembled with heat or solvents and, at the very least, the raw materials can be ground/broken and then mechanically separated," Karnesky wrote in an email.

Regardless, Wiens goes on to make another interesting point: Apple introduces products with a "built in death clock," but are thinner and lighter than their upgradable, repairable counterparts. Apple releases both products at the same time and lets its customers decide which designs the company will pursue, Wiens wrote.

We, the customers, continue to choose the lighter, thinner products instead of long-lasting products and Wiens wonders what it means about our culture.

Apple has given us the same choice with the new MacBook line. We will see what the market decides.

We welcome your comments on this topic on our social media channels, or [contact us directly] with questions about the site.
Comment  |
Email This  |
Print  |
RSS
More Insights
Webcasts
Building and Refining Threat Hunting Practices in Your Enterprise
Enterprise Database Strategies for 2020
More Webcasts
White Papers
DevOps for the Database
Wired vs. Wireless LAN Solution
More White Papers
Reports
Online Threats -- and What Your Org Can Do About Them
[Special Report] Remote Network Management
More Reports