Nokia's first foray into tablets is an attractive piece of hardware with Windows RT under the hood.

The Nokia Lumia 2520 hits Verizon Wireless stores Thursday and AT&T stores on Friday. The Windows RT tablet has a lot going for it, but it also has plenty of competition on retail shelves heading into the holiday season. A first look at the 2520 reveals Nokia's strength in design and manufacturing.

The 2520 is a large tablet. It's about the same width as the Apple iPad Air, but it is significantly longer. The 2520 is also quite heavy -- 1.36 pounds to the Air's 1.05 pounds. Nokia favors polycarbonate materials for its Lumia-branded hardware, and that's what forms the outer shell of the 2520. Nokia sent InformationWeek a black review unit, but it also comes in white, red, and cyan. The polycarbonate has a matte finish that looks good. The device has rounded edges and there are no sharp angles anywhere. This all helps make the 2520 feel comfortable when held.

The 2520 has a 10.1-inch screen with 1920 pixels by 1080 pixels. It is an LCD panel that uses Nokia's ClearBlack technology with sturdy Gorilla Glass 2 from Corning. It looks fantastic. Windows RT appears sharp and vibrant. Colors are rich, with plenty of brightness and contrast.

[ Your phone might soon take a big leap forward in understanding your requests. Read Do Smartphones Need Neural Processors? ]

I don't like where the buttons are located. The 2520 is clearly meant to be held and used in landscape orientation most of the time. The power button and volume toggles are placed on the top of the tablet, which means you have to adjust your grip on the tablet to reach them. The power button works well, but the volume toggle is a bit stiff. The 2520 has a micro-USB 3.0 port on the right side. Sadly, the 2520 doesn't use the USB port for charging. Instead, the 2520 has a proprietary power port on the left side. The headphone jack is also on the left side. The main camera is positioned on the back side of the table, in the far right corner. I found my fingers sometimes covered it and left fingerprints on the lens cover. 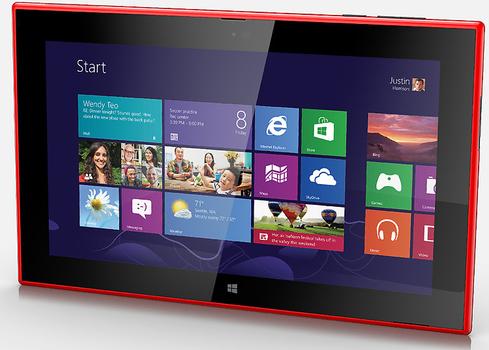 The 2520 includes a ton of networking options. The review unit sent by Nokia connects to Verizon's LTE network. This is perhaps one of the best features of the tablet. Nokia is offering LTE connectivity for $130 less than a similarly equipped iPad AIr. When taken for a trial run, the 2520 performed admirably on Verizon's LTE 4G network. The 2520 also supports dual-band WiFi, NFC, GPS, and Bluetooth 4.0.

There are a wide range of applications preinstalled on the tablet, including the standard set of Windows RT apps. It took only a few minutes to set up email, contacts, and calendar and tweak the settings of apps such as weather, Skype, Here Maps, and others. The WinRT versions of Microsoft Office are all on board, as are tools such as SkyDrive, OneNote, Notepad, Paint, and others.

The Nokia Lumia 2520 costs $499, but AT&T and Verizon will sell it to you for $399 if you sign a two-year data contract. The 2520 is an attractive piece of hardware that easily matches the quality of competing tablets. The big question people need to answer for themselves concerns the Windows RT operating system. It's not quite as capable as the full Windows 8.1 operating system that's available on tablets that cost just a little bit more than the 2520.

Does anyone plan to run out and snag the Lumia 2520 this weekend? Leave a comment!