50%
Tweet
The new iPad isn't just beautiful on the outside. Check out the inside view of how Apple made this tablet's power and design click. 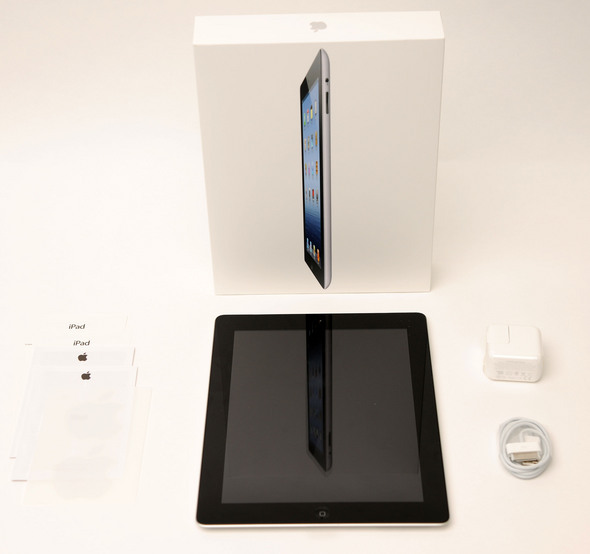 At first glance, Apple's third-generation iPad is all about the screen. With a resolution of 2048-by-1536--significantly better than the competition's displays at the moment--the iPad's Retina display is the cover by which this book will be judged.

But the iPad's high-resolution beauty is more than skin deep. There's an improved processor, Apple's A5X, to help handle the Retina display's 3.1 million pixels and to provide faster performance overall.

There's also a larger, more powerful battery, which you might notice by the iPad's slight weight gain. Apple's iPad 2 had a battery rated at 25Wh. The third-generation iPad's battery weighs in at 42Wh, a measure of power output that falls between the batteries in Apple's MacBook Air 11" and 13" models, 35Wh and 50Wh respectively.

Apple had to use a larger battery to maintain the 9-hour to 10-hour battery life that iPad users have come to expect--the new iPad is more powerful and thus requires more power.

Given that AT&T and Verizon place limits on mobile data transmission, buying an iPad with 4G LTE is akin to buying a McLaren MP4 for urban driving--you may be capable of going fast but you may not want to, or be able to, much of the time.

Apple's Facetime video chat system seems as if it would benefit from 4G LTE networking, but Apple won't allow it--Facetime can only be used with a Wi-Fi connection, presumably to avoid overwhelming mobile carriers' networks with data.

The new iPad comes with an improved rear-camera, capable of 5 megapixel images and 1080p video. The front camera? Well, it's not much to speak of, but it's there.

Hardware is only half the picture, but the software designed to take advantage of Apple's latest iPad deserves separate consideration.

To delve into the innards of the new iPad, we've turned to UBM TechInsights to take apart the device someone had just waited eight hours to buy.