Skitch lets you annotate images with arrows and circles and text--it's a good way to mark up anything from a screen shot to a PowerPoint document to a photo. Again, the text and the icons are improved, but the functionality was pretty much the same (in the App Store it says, like so many others do: "Graphics and interface optimized for the iPad's new Retina display"). Really the changes are cosmetic. (And that's not a bad thing.)

Apple also upgraded the iPad's processor, notably adding quad-core graphics processing to the mix, and claiming faster performance than NVIDIA's Quad-Core Tegra 3. For me, some things simply loaded more quickly. Solar Walk, for instance, loaded several seconds faster on the new iPad, as did StockTouch. But even in Solar Walk, which is graphically deep, with many amazing effects, the planets spun equally, and with similar controls, using either iPad.

Players moved a little quicker from one challenge to the next in Infinity Blade 2 on the new iPad, but I couldn't see any major difference in the actual speed of the duels, nor in the animation and textures on screen. The same was true of Flight Control Rocket. In other words, whatever speed gains the quad core graphics processor provides, the games don't take advantage in a noticeable way, yet. I'll drop the usual caveats that your experiences may differ, and I'm definitely not even close to the casual game player (but my eyes do work).

One of my favorite apps is Autodesk's SketchBook, and the new iPad really shines within this digital art program. When I was really zoomed in, I could make very minor additions to my attempt at art using any of the tools. On the iPad 2, I lost some of this control, and my actions were much less forgiving. (The image below was created by a high school art student in about 15 minutes on my new iPad, with no instruction on how to use the app.) 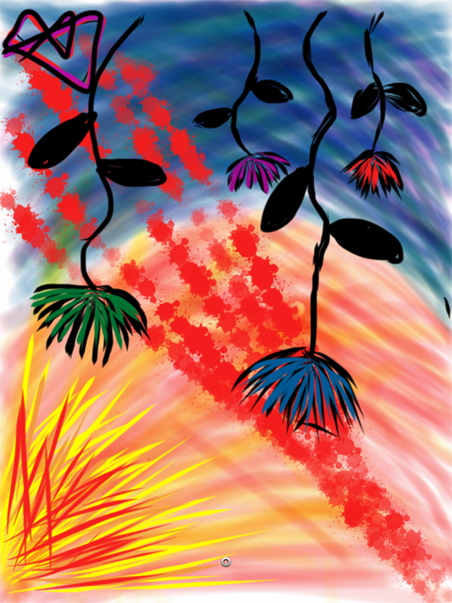 The camera is so much better on the new iPad that I can hardly believe anyone could have used the one on the iPad 2. Not only does this camera shoot still photos and video at higher resolution, it has a backside illumination sensor for capturing pictures in high or low light, autofocus, tap to focus and tap to set exposure, along with the built-in face detection. In my own experimentation (again, side by side), it handled light really well, creating good, usable pictures where the iPad 2 could not. The same was true with video--just far more usable, better lit, better colors, better focus. And there's room for improvement, given that there are better sensors coming out on phones almost weekly now.

Yet it amazes me how many people I see holding up iPads to take photos and video. Other than fooling around with the camera, or for tests like these, I feel pretty silly holding it up like it's one of those old-fashioned photograph machines, half expecting a poof of black smoke to arise upon capturing my quarry. And I can't, for the life of me, understand why Apple kept the front-facing camera to its pathetic VGA-ness. I can see using Fuze Meeting or WebEx for live business videoconferencing much more than using the iPad as a camera. And I can definitely see using Apple's Facetime and Microsoft's Skype video chat, so the ability to send high quality video into a group video system is becoming more important, and Apple still has a chance to push a quality experience here.

Even if you're convinced that you just simply deserve to have better with the newest of iPads, even at $100 more, because ... I don't know, maybe it's your first iPad, or maybe you skipped the iPad 2, or maybe you're just that person who has to have the newest cool gadget ... pause at this: the new iPad's better graphics means bigger files, and bigger files means more storage, either on the device or in the cloud, or both; and it also means that data (like from photos and videos) size will increase, and bandwidth usage will increase.

Photos I took using the iPad 2's default camera settings were about 250 KB; the exact same files on the new iPad were 1.2 MB and higher. Not a big surprise, given the new iPad has a 5 MP camera, where the iPad 2 had a pathetic 0.7 MP, but this new consumption device sure does consume.

One thing I was pleased with was the new iPad's battery life. For a great deal of an entire day I performed mirrored tasks, as best possible, on both tablets and found the quality of battery life nearly identical, which is to say very good. Given that the iPad 2 is a year old, it started to drain a little quicker, but both tablets easily last all day with frequent use.

I'm not sure I completely trust the new iPad's dictation capability, but in my limited use it worked well. This will require more testing, however. It's a feature, not really a reason to buy the product.

Indeed, in an age where every tablet nuance and enhancement gets unveiled on a stage, it's becoming necessary to separate the hype from reality. The new iPad is very real, and it's very good, and it's even a much better iPad. But it's not as if my fingers are bathing in buttery luxury, or my thoughts are being organized for me, or cookie recipe odors are wafting, and children everywhere are suddenly cleaning their rooms.

Get it if you must, but what's the rush?

Here are some of the applications mentioned in this column and worth checking out:

The Enterprise 2.0 Conference brings together industry thought leaders to explore the latest innovations in enterprise social software, analytics, and big data tools and technologies. Learn how your business can harness these tools to improve internal business processes and create operational efficiencies. It happens in Boston, June 18-21. Register today!?

... maybe that's how your eye doctor appointments go but, mine are much different. They go something like this:

Me: Doctor, I'm going blind!
Doctor: No you're not, you just haven't been wearing your glasses.
Me: That's because I keep losing them.
Doctor: Well stop losing them then.

They be uses a machine to blow air in my eyes and spends time telling me how much worse my vision got over the last year.

Anyway, iPads. I more or less agree with your assessment. I've found the new iPad to be underwhelming. However, the new screen should be a source of concern for every publisher out there. Viewing my stuff online through the new iPad, I can tell you that lots of publishers will want to consider the multiple renditions of video they render, the quality of graphics they use, etc. For this reason alone - QA'ing cosmetics - I've demanded them for my team.

I was really hoping for a borderless screen, a A6 cpu, more memory and better speakers. Maybe the iPad 4 will deliver those things.

Melgross, I have a question for you -- I didn't have time to test this, but I noticed in reading books on an iPad (iPad 1 and iPad 2), that I got eye fatigue after about 10 pages. Obviously The Kindle's e-Ink solves this for many people (I don't use a Kindle, but I read a great many regular, old-fashioned books). My question: Do you find that the Retina display lessens eye fatigue? Or it's pretty much the same? Or maybe you didn't have problems with that? I'd be curious to know what people are finding, because I'm skeptical that the new iPad fixes this issue, since it's less about the crispness of text and more about the light from the display, as I understand it . . . but maybe the crisper text helps a little?
Reply  |  Post Message  |  Messages List  |  Start a Board

I do a great deal of reading on my iPad, and the new one has made a big difference in the ease of it. That alone, to me, is worth it. But the better color is important for my photo apps as well.

I'm using LTE, and where I am, Forest Hills NY, I'm getting an amazing 45 mbs download, and 14 mbs upload speeds. And this is on the much maligned AT&T.
Reply  |  Post Message  |  Messages List  |  Start a Board

This is a good, balanced article on the iPad3.
Reply  |  Post Message  |  Messages List  |  Start a Board
Editors' Choice
Hot Topics