A heads-up display promises safer access to your smartphone while driving.

Navdy, a San Francisco-based startup, makes its case for its heads-up display for cars with a non-sequitur.

"It's a heads-up display just like what commercial airline pilots use when they're landing," says an avuncular actor in a YouTube video. "You hear that? Pilots use it. It's safe."

That's dubious logic. Commercial aviation safety isn't easily compared to automotive safety. Pilots aren't using Navdy's equipment. And usage of a system by pilots doesn't in and of itself make the system safe.

A 2007 study conducted by researchers at Munich University of Technology and BMW found that HUDs in cars present information more efficiently than HDDs (heads-down displays, or traditional dashboard controls), and keep drivers' eyes on the road for longer periods. But it also cautioned that HUDs have some disadvantages, such as reduced peripheral vision, distance overestimation, and attention capture.

A 2004 NASA study of HUDs in aircraft offers a similar assessment: HUDs have benefits -- and costs -- for attention. Both studies conclude that more study of HUDs and attention is needed. In other words, the issue is too complicated to declare, "It's safe."

If safety is the goal, the best option would be to set one's smartphone aside while at the wheel. But that would endanger Navdy's investors. 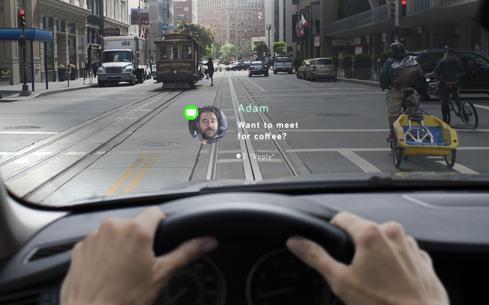 Navdy might be trying to distance itself from Google Glass, which managed to prompt bills in at least eight states -- Delaware, Illinois, Maryland, Missouri, New Jersey, New York, West Virginia, and Wyoming -- to ban or regulate use of the computerized eyewear while driving.

Perhaps a better question about Navdy's hardware would be, "Is it necessary?" It isn't, but it's appealing, particularly for those who cannot discipline themselves to leave their smartphones unmolested while on the road.

When it ships in early 2015, the Navdy HUD will make popular iOS and Android navigation, music, and communication apps visible in its dashboard-mounted display using a simplified interface. It promises to enable easier turn-by-turn navigation and in-car messaging.

The device is currently available for pre-order at the discounted price of $299. Its expected retail price at launch is $499. There's no subscription fee.

Is it safe? That depends on how it's used and who's behind the wheel.

Thomas Claburn has been writing about business and technology since 1996, for publications such as New Architect, PC Computing, InformationWeek, Salon, Wired, and Ziff Davis Smart Business. Before that, he worked in film and television, having earned a not particularly useful ... View Full Bio
We welcome your comments on this topic on our social media channels, or [contact us directly] with questions about the site.
Comment  |
Email This  |
Print  |
RSS
More Insights
Webcasts
Using MS Teams as Your Phone System - FREE Event 4/14
Advancing the Hybrid Cloud & App Modernization Journey with IBM
More Webcasts
White Papers
2020 SANS Enterprise Cloud Incident Response Survey
The Top 5 Mistakes Everyone is Making in Vulnerability Remediation
More White Papers
Reports
Key Strategies for Managing New Risks in Cybersecurity
Are We Cyber-Resilient? The Key Question Every Organization Must Answer
More Reports

In other words, the issue is too complicated to declare, "It's safe."

If safety is the goal, the best option would be to set one's smartphone aside while at the wheel.

You have to be reading very selectively to conclude the article accepts Navdy's claims.
Reply  |  Post Message  |  Messages List  |  Start a Board

I associate HUDs more with jet fighters than commercial aviation, although they apparently have made it onto some jetliners. Regardless, HUDs are used selectively (not for the data on every guage and dial) and only for critical pieces of information intended to improve safety (or in a military context, situational awareness). There are some HUD technologies that make sense for automobiles, for example to help the driver to see better in the dark, if they improve the actual operation of the car. But that's where it should stop.
Reply  |  Post Message  |  Messages List  |  Start a Board
Editors' Choice
Hot Topics