Consider this a warning shot, Apple, and Google Android competitors. Google and Motorola Mobility's new Android-powered Razr phones are now available for pre-order through Verizon, with the lowest phone in the lineup costing just $99.

Their words seemed honed to work as a subtle rebuke to the patent spats that have been rocking the mobile world. Woodside especially was blunt in his insistence that Motorola invented cell phone technology as we know it. All expressed confidence in Verizon's networks, Motorola's engineering finesse and patent roster, Google's resources, and Android's massive user base and application library.

Then came the phones themselves, a trio of new Droid Razr releases. These devices provide that much more evidence for Android-powered phones being great products when built by the right people. 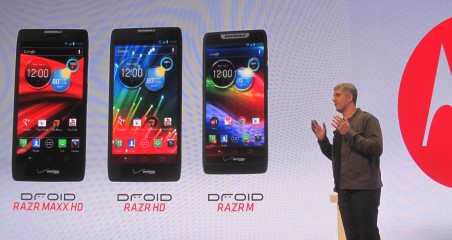 The Razr HD, the core model of the lineup, boasts a 1280x720 display with 85% better color saturation than the iPhone 4S, a 2530 mAh battery that provides 16 hours of talk time, a 8.4mm-thick aluminum chassis with a Kevlar backplate and a Gorilla Glass front with almost no bezel, a side-access slot for the SIM and Micro SD card slots, 16GB of internal memory, an 8 megapixel camera that records 1080P, NFC support, and a 1.5-Ghz dual-core processor. The Razor Maxx HD has even more battery life--3300 MaH--and 32GB RAM.

A smaller model that still keeps as much of the screen size as possible, the Razr M (960x540) also sacrifices some battery life (2000 mAh) for the sake of being that much lighter and thinner. All three models were comfortable to hold--much more so than with the "phablet" models that Samsung has been pushing lately--and very easy on the eyes. All the new phones run the Ice Cream Sandwich iteration of Droid and will be upgraded to Jellybean "some time before the end of the year," according to Motorola representatives.

The biggest piece of ammo so far seems to be the pricing: the M is set to debut at $149--$99 when you factor in a $50 mail-in rebate--via a new two-year Verizon contract and data plan, of course. Pricing for the other models is not yet set, but even at that price the M doesn't look, feel, or run like a cut-rate piece of hardware.

When I looked at the Droid 4 earlier this year, I liked what I saw, even if the heft of the phone was a bit much. This new iteration of the Razr looks to lose the bulk without ditching any of the functionality--and, one hopes, at a price that's appetizing enough for corporate suits and average Joes alike. 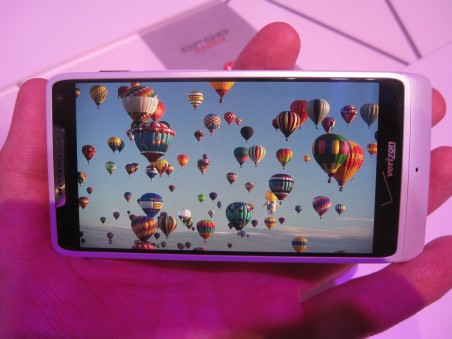 The Droid Razr M up close.
We welcome your comments on this topic on our social media channels, or [contact us directly] with questions about the site.
Comment  |
Email This  |
Print  |
RSS
More Insights
Webcasts
The Threat From the Internet - and What Your Organization Can Do About It
IT Automation: Scaling to the Future
More Webcasts
White Papers
Securing IT & OT in Industrial Environments
Ransomware Response Report: Trends & Outlook
More White Papers
Reports
An Insider's View into a Supply Chain Attack
How Enterprises Are Developing and Maintaining Secure Applications
More Reports