The Xoom is the first shipping tablet with dual-core processors, and the first to run Android 3.0. UBM TechInsights took the device apart and found similarities to Motorola's Atrix 4G smartphone.

The Xoom tablet started shipping today, welcomed by a symphony of reviews orchestrated by Motorola (each was published around 9 p.m. EST on Feb. 23). Let me summarize all of them: The device is beautiful and extremely fast; the new operating system has a few quirks but is a great improvement; it doesn't have as many apps as the iPad has; and Verizon's pricing for it is ominous, though comparable, to its pricing for the iPad. Got it?

Our sister company, UBM TechInsights, went out and bought one, took it apart, and analyzed what's under the hood. After all, this is the first tablet to ship with a dual-core processor (the NVidia Tegra 2) and run Android 3.0 (Honeycomb), and there are many more tablets waiting in the wings. Xoom gets to be first, so we wanted to see what makes it tick.

That is, Xoom shares some very important components with Motorola's newest attention-grabbing smartphone, the Atrix 4G. This isn't a big surprise, Yogasingam noted, because the use of integrated circuits across a family of products makes both design and supply chain management more scalable and cost effective. 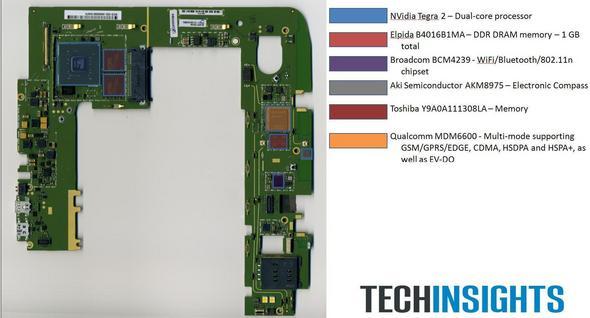 The Xoom is another key design win for NVidia's Tegra 2, Yogasingam told us, but "from a technical perspective, it's not exactly clear why" the chip company is doing so well in the tablet sector:

"Tegra 2's dual ARM-core architecture, high-speed memory interface, and impressive graphics are all important as a hardware platform for Android's increasingly heavy operating system, but both Samsung's Hummingbird and Qualcomm's MSM7230 have Low Power DDR2 support. They also interact quite well with high-speed memory, even though they're only single-core architectures. Interestingly, Texas Instruments' OMAP 4430 is quite comparable on paper: dual ARM cores, LPDDR2 interface, and available to developers for quite some time. Yet we won't see design wins until the RIM Blackberry Playbook is introduced. Our speculation is that NVidia comes out ahead because of the 'softer' factors: price, availability, and support."

Yogasingam noted that the Xoom represents a design win for Qualcomm as well. The San Diego-based chip giant, which introduced the quad-core Snapdragon (Krait) at Mobile World Congress in Barcelona this month, sees its PM8028 PMU (power management) and MDM6600 (multi-mode communications) "provide the connectivity for another major product." Yogasingam added: "It's been a good month for Qualcomm. These two products have found themselves in high-production items like the Verizon iPhone 4, the Motorola Atrix 4G, and now the Motorola Xoom.

What's inside a tablet or a smartphone may seem to be the turf of engineers and gadget wonks, but almost overnight, these miniature devices have taken on the power and sophistication of the modern laptop and desktop computers. Motorola's Atrix 4G fits into what amounts to a keyboard and monitor shell. In other words, it is the processor for a much different computer -- one that's more portable, one that can run enterprise apps via Citrix Receiver Client, one that can access the growing number of Web applications, and one that also happens to be your phone. Hewlett-Packard's demonstrations of phones, tablets, and PCs running WebOS reveal a world where these devices start to blend and can truly become purpose-fitting enterprise tools. And now, they've got the power inside to make that happen.