Motorola, recently acquired by Lenovo, looks to customization and strong battery life to stand out in a crowded smartphone market. The Moto G4 and Moto G4 Plus, along with the Moto G4 Play, are all designed for budget-conscious users in emerging markets.

Motorola is looking to carve a niche in the overcrowded smartphone market by appealing to the consumer's interest in customization with the Moto G4 Plus and Moto G4 Play, the two latest editions of the Moto G family.

The company also announced a thinner, fourth-generation Moto G4, which boasts a 5.5-inch full HD display and a 13-megapixel camera. It lets users customize the device by switching up colors with interchangeable shells. 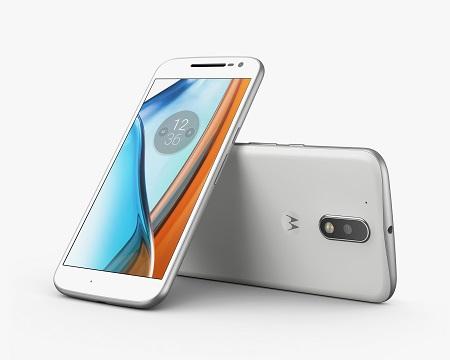 Users also have the option of expandable memory by adding an up to 128GB microSD card.

The 16 MP camera on Moto G4 Plus has two additional rapid focus technologies -- laser focus and phase detect autofocus -- and features a fingerprint reader to instantly wake up the device. It can also be used to authorize purchases on the Google Play Store.

The Moto G4 Plus also features 5 MP front camera with a wide-angle lens for group shots.

The Moto G4 Play features a Qualcomm Snapdragon 410 processor with a quad-core CPU and 2GB of memory and a 2800 mAh battery, which boosts performance by running a pared-down version of Google's Android operating system.

However, the company noted both versions would arrive soon in various countries across North America, Europe, Latin America, and Asia Pacific, while the Moto G4 Play will be available globally starting later this summer.

[Read about Lenovo's mobile and PC announcements from MWC.]

The company declined to publish the exact price of the smartphones, which are aimed at budget-conscious users, hinting coyly that, "You only have to spend a little for a phone you'll love a lot," and noting the "exceptional price" of the Moto G4.

"When it comes to smartphones, sometimes we feel let down. The things that matter most -- like taking great photos at our kids' soccer games, video chatting with mom or having all-day battery life -- simply don't live up to our expectations," according to a May 17 blog post. "It shouldn't be this way. Smartphones should focus on technology that prioritizes the things people really care about."

According to the terms of the deal, Motorola received a license to this portfolio of patents and other intellectual property, and will retain over 2,000 patent assets and a large number of patent cross-license agreements, as well as the Motorola Mobility brand and trademark portfolio.

Nathan Eddy is a freelance writer for InformationWeek. He has written for Popular Mechanics, Sales & Marketing Management Magazine, FierceMarkets, and CRN, among others. In 2012 he made his first documentary film, The Absent Column. He currently lives in Berlin. View Full Bio
We welcome your comments on this topic on our social media channels, or [contact us directly] with questions about the site.
Comment  |
Email This  |
Print  |
RSS
More Insights
Webcasts
How Elite Analyst Teams are Transforming Security with Cyber Reconnaissance
Making Cybersecurity Work in Small and Medium-Sized Businesses
More Webcasts
White Papers
How to Prioritize Risk Across the Cyberattack Surface
Seven recommendations for a Successful SD-WAN Strategy
More White Papers
Reports
2020 State of Cybersecurity Operations and Incident Response
Special Report: The Changing Face of Threat Intelligence
More Reports