Motorola is holding a splashy event in NYC July 28, and leaks have provided a solid look at what's in store.

Motorola's mid-range handset, the Moto G, has leaked in full before Motorola had a chance to formally introduce it. The company's media event, scheduled for July 28, may still have a few surprises in store, however, including other smartphones and wearables.

Motorola's handset lineup for the last few years has consisted of three main devices: The flagship Moto X, the mid-range Moto G, and the entry-level Moto E. The invitation sent to media for next week's event alluded to new variants of the X and G smartphones, which falls in line with Motorola's annual update schedule.

New details from several sources have revealed almost all there is to know about the Moto G.

Motorola itself accidentally published a website containing information aplenty. For example, Motorola will let people design their own Moto G via its Moto Maker website. The Maker tool has previously been reserved only for the flagship Moto X handset. It now appears Motorola is extending the customization option to the Moto G. 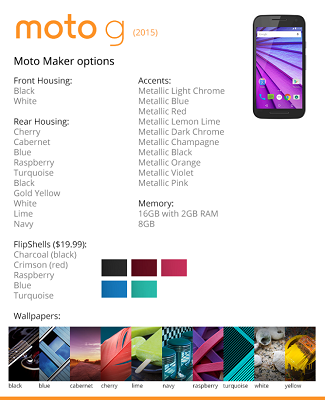 People who order the Moto G will be able to choose from two different faces (black or white), 10 different rear colors, and 10 different accent colors. The options don't include wood or leather, which are available to the Moto X, but the collection of plastic shells is significant. The handset will also offer a handful of custom wallpapers.

As far as specs are concerned, a Brazilian site spilled those details in a video.

The phone will have a 5-inch, 720p screen protected by Gorilla Glass, and it will have modest protection from water spills thanks to an IPX7 rating. Under the hood, the Moto G will feature a quad-core Snapdragon 410 processor with either 1 GB of RAM and 8 GB of storage, or 2GB of RAM and 16 GB of storage. Motorola boasts that the G will feature all-day battery life. The G will include 13- and 5-megapixel cameras on the back and front, respectively. There's no word on what special functions they might include.

[Read about how the iPhone makes money for Apple.]

Motorola's handsets have run a near-stock version of Android since 2013. The G will have Android 5.1.1 Lollipop at its core, and hopefully some of Motorola's inventive add-ons, such as Active Display.

Two key details remain unknown: The price, and whether or not the Moto G will support LTE. The 2014 and 2013 variants of the G were limited to HSPA+ wireless radios.

Also on deck for the July 28 event could be a refreshed version of the Moto X smartphone and Moto 360 smartwatch. Details concerning these products have remained under tighter guard.

InformationWeek will be on hand to bring you all the details.

Eric is a freelance writer for InformationWeek specializing in mobile technologies. View Full Bio
We welcome your comments on this topic on our social media channels, or [contact us directly] with questions about the site.
Comment  |
Email This  |
Print  |
RSS
More Insights
Webcasts
People Are The Most Important Part of Autonomous SOC
Nip Ransomware in the FUD: Detecting Attacks Pre-Encryption
More Webcasts
White Papers
Why Add Security to Your Skill Set and How to Do It
2021 SANS Cyber Threat Intelligence Survey
More White Papers
Reports
Protection Strategies for a Cyber-Resilient Organization
Are Unprotected Cloud Databases Leaking Your Data?
More Reports
Copyright © 2021 UBM Electronics, A UBM company, All rights reserved. Privacy Policy | Terms of Service