Best Buy gave an early reveal of previously unknown data points about the device, including its price.

Weekend Web surfers were treated to a surprise on Best Buy's site, which mistakenly listed the Motorola Moto 360 smartphone on Sunday. The product listing, since pulled, revealed nearly all the details about the forthcoming device from Motorola. The Android Wear-based smartwatch is expected to make its official debut Sept. 4 at an event in Chicago.

Motorola first showed off the 360 several months ago. It is one of the first three devices to rely on Google's Android Wear platform. LG and Samsung have already released their Android Wear devices. The Moto 360 needed a bit more time to prepare, but many expect it to be worth the wait.

[What can save the wearables market? See Smartwatches Need A Disrupter.]

Unlike the LG and Samsung efforts, the Moto 360 uses a circular, rather than square, design. It features a 1.5-inch LCD touch screen. It has 320 x 290 resolution, giving it a pixel density of 205 ppi. According to the Best Buy listing, the display's brightness can be adjusted automatically, which hints at the presence of an ambient light sensor. Corning Gorilla Glass 3 protects the display, and it has a stainless steel back. The device is water resistant for up to 30 minutes in one meter of water. 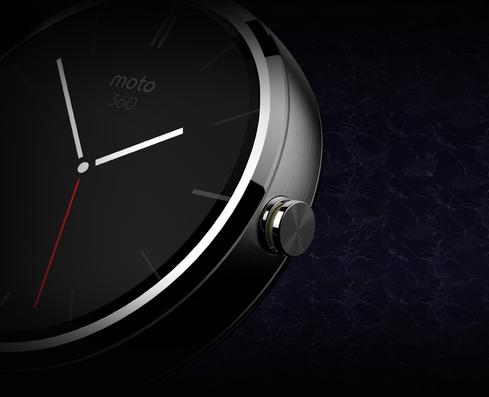 The Moto 360 uses Bluetooth 4.0 Low Energy to talk to nearby smartphones. The device is voice-activated, which allows users to speak to open apps and initiate actions. A vibrate alert function lets owners receive notifications, such as incoming calls, emails, or messages, discreetly. It also includes built-in alarm and calendar apps for setting reminders and upcoming appointments.

Some health-focused features are included, too. According to Best Buy's product listing, the Moto 360 boasts an optical heart-rate monitor and built-in pedometer. These, paired with fitness apps, can help owners manage fitness and health goals.

Of the three Android Wear devices announced to date, the Moto 360 will be the most expensive. Best Buy priced the wearable at $250. That's $20 more than the LG G Watch and $50 more than the Samsung Gear Live. The Moto 360 has generated more buzz than the G Watch and Gear Live thanks in part to its more premium design. It appears as though Motorola thinks the design is worth some extra cash.

Aside from the design and hardware differences, the operating system across the 360, G Watch, and Gear Live is the same. Google has already set up an Android Wear section of its Play store, where users can browse apps compatible with Google's wearable platform.

Motorola will fully unveil the 360 in two weeks alongside two new smartphones. There's no word on when the 360 will actually go on sale, but it shouldn't be too long following the Sept. 4 event.

Yes, I'm not seeing a compelling use case here. I get that device makers need to start pushing these products to get in on the wave of wearables, but where's the killer app?

I just don't think it has been created. But then again, in order for it to be created companies like Motorola need to get product on the shelves.
Reply  |  Post Message  |  Messages List  |  Start a Board

Not good, Motorola. The anticipation has been high for the 360 with AMOLED and Sapphire Glass. AMOLED will be necessary for blacks dark enough to make the clock face look like a real watch face. LCD can't produce dark enough blacks and this will diminish the value and beauty of the device.

No thanks, Motorola. I'll wait to see what Samsung comes up with in a round smartwatch.
Reply  |  Post Message  |  Messages List  |  Start a Board

It doesn't seem to do much. I hope the heart rate sensor actually works. So far, none of those on phones or watches are usable.
Reply  |  Post Message  |  Messages List  |  Start a Board
Editors' Choice
Hot Topics