Can Motorola's smartwatch, based Google's Android operating system for wearable devices, succeed where others have failed?

In conjunction with Google's introduction of Android Wear, the company's version of Android for wearable devices, Motorola on Tuesday announced its Android Wear-based smartwatch, Moto 360. Motorola was recently sold by Google to Lenovo.

The most striking feature about the watch, slated to ship this summer, is that its display isn't rectangular.

"When we started to think about what we should do in terms of the design of the watch, we really went back in time," said Jim Wicks, Motorola's corporate VP of consumer design experience, in a video. "This is all about the invention of the modern-day timepiece. We decided if we're going to do Moto 360, we must do it round."

That decision may win points as a nod to timepiece tradition and as bold design choice, but it's likely to vex developers as they try to make sure content and UI elements created for rectangular display screens will work in a circular window.

[Hardware is important, but Software Is Key For Wearables In The Enterprise.]

The Android Wear SDK, when it's released later this year, can be expected to handle details like scaling and wrapping text to fit a circular screen. But the diversity of rectangular Android phones already presents interface design challenges. Adding a round form factor to the mix could complicate matters if Google's engineers haven't anticipated potential issues.

The Moto 360 video recalls Apple's recent "Designed by Apple in California" ads, which present design and engineering with a reverence that echoes religious passion. There's even British-born design expert to serve as a counterpart to Apple's Jony Ive: Dickon Isaacs, Motorola's head of wearables design. 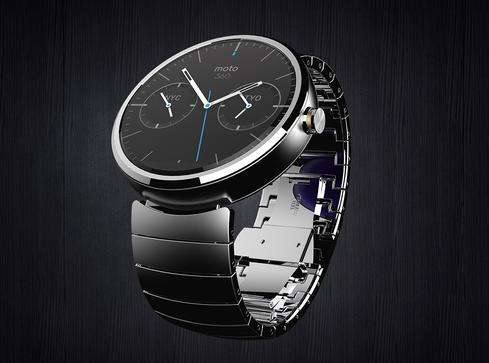 The similarity may be coincidental, but Motorola does appear to be trying to bring its smartwatch to market before Apple can deliver its long-anticipated iWatch. So too is LG, which is planning to ship its G Watch, running Android Wear, later this year.

So far, the market for smartwatches looks rather grim: Samsung claimed last November that it had shipped 800,000 of its Gear smartwatches since the device's September launch. Reuters initially characterized that figure as units sold, but The Verge said it represents units shipped to retailers. A report published by Business Korea claims actual Gear sales were only about 50,000 during this period. Presently, Samsung's Gear is selling for half of its original $299 launch price, a discount that would not be necessary if the device were in demand.

Two successor models, the Samsung Gear 2 and Gear 2 Neo, are planned for release in April. But they will be running the open-source Tizen operating system rather than Android Wear.

Despite all the hype surrounding smartwatches and the inevitability of a growing wearable-device market, the Moto 360 will have to confront the same issues as other wearable pioneers.

1. Purpose
The foremost issue facing smartwatches is the lack of a unique killer app, something that would make the device a must-have item. The problem is simple: There's nothing current smartwatches can do that smartphones can't do. That may change once smartwatches gain wrist-specific health-monitoring sensors. But at the moment, smartwatches come across as costly, unnecessary smartphone accessories.

Smartwatches do have an advantage in terms of weight. And once the Android Wear SDK ships, they should gain an edge in terms of hands-free use, at least when not in a car.

There are other problems to be overcome as well.

2. Price
As noted above, the $300 price tag for Samsung's Galaxy Gear appears to be more than the market will bear for a redundant communications device. The Pebble smartwatch lists for $249. And then there's the issue of mobile

$299 and $99 have always been "magic" prices in consumer electronics. I am not sure people will pay for a luxury smartwatch any more than they will a luxury tablet. A luxury case, perhaps.
Reply  |  Post Message  |  Messages List  |  Start a Board

This is what I would want in a smart watch.    If it had a special graphics output to connect to an LCD and link to a wireless keyboard, and mouse, I could see real value.  A basic internet browser, open office, would allow it to be a micro computer productivity tool. The ability to connect to my home wireless so I had access to a printer, netflix.  I could then stream from my home wireless to the watch, and watch movies in my bedroom.  Nice.

With these features, I can see the $300.00 price tag.  Without being a portable computer, phone, I would consider it to be a gadjet luxury item.  If I could have a small functional phone, computer on my wrist, that would be totally cool!  I would pay the $300.00  I know I am asking for allot in a small device, but if I do not ask, I will never recieve.
Reply  |  Post Message  |  Messages List  |  Start a Board

I'm sure Motorola would like to offer its timepiece at Rolex-like prestige prices, but you can't do that with tech gadgets that become obsolete in six months. When you buy a $4,000 or $40,000 watch, you expect it to last for a while.
Reply  |  Post Message  |  Messages List  |  Start a Board

I'm not sure cost is a much of a factor when buying a watch.  All quartz watches keep good time.  So the expensive Seiko, Citizen, or Rado doesn't offer any greater functionality than a reasonably priced Timex.  Rolex makes many fantastic mechanical watches, but they don't tell time any better than the Timex.  Perhaps, not even as well.  A $16,000 Breitling watch might be able to save my life -- actually, it's more like it would help others save my life -- but doesn't tell time any better than any other watch.

Watches have quite a conspicuous consumption factor.  Casio's Databank watches?  When is the last time you saw one of those.  Shoot, even James Bond has ditched the online watch of "The Spy Who Loved Me" for a basic watch.  I suspect that smartwatch sales will be driven by conspicuous consumption more than actual tangible benefit.

A watch that has to be recharged every few days -- what a pain! -- had better be able to stand on its own.  If I've still got to carry a phone, I've only gained more clutter and aggravation in my life.  Remember how uncomfortable you were the last time your watch quit or you left home without it.  The smartwatch doesn't sound smart to me.

Will the round design make this smartwatch more appealing to you, readers? What is an acceptable price that would make you try a smartwatch?
Reply  |  Post Message  |  Messages List  |  Start a Board
Editors' Choice
Hot Topics