With Windows 8, Surface, and the many OEM Windows 8 systems being released, Microsoft is attempting to redefine the personal computing market. In the new vision, tablets are PCs, and tablets that can't do the things PCs do--such as use a keyboard and mouse and multitask--are deficient. Windows 8 PCs and tablets can do these things; Android and the iPad cannot. If Microsoft can make the sale, then we are in store for an industry revolution.

It's the end of the tablet era. The touch PC era is begining.

I'm not positive I believe that, but it's basically the vision Microsoft has for Windows 8. Tablets, it says, are PCs, and should be expected to do the things PCs can do. Windows 8 tablets can do PC things, and Windows 8 PCs can do tablet things.

I want to believe it's true. A tablet isn't enough for what I do. I also need to carry a notebook around with me. This means that my tablet is yet another thing I have to schlep around. Wouldn't it be nice for them to be effectively consolidated? 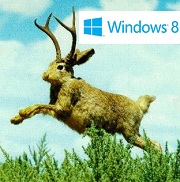 Tim Cook thinks Windows 8 is an unnatural mixture of two distinct species.
Apple's CEO Tim Cook doesn't think they can. AllThingsD quotes him thus: "You could design a car that flies and floats, but I don't think it would do either of those things very well. ... People will look at the iPad and at competitive offerings, and I think they'll conclude the iPad is the better choice."

Who's right? Cook, or Microsoft's Steven Sinofsky and Steve Ballmer, both of whom at the Windows 8 launch event in New York Thursday convincingly pledged the full weight of Microsoft behind Windows 8 and the OEMs. Even with Microsoft entering the PC market for the first time, the OEMs will sell the vast majority of Windows 8 devices. Many of those OEMs were in evidence at the event, and they have been showing their hardware to the press all week. Today you can actually buy systems from Microsoft, Samsung, Dell, Asus, Toshiba and others.

Cook had better hope Windows 8 is a two-headed monster and not a clever fount of technological innovation, because Apple's got nothing to respond with. Neither, incidentally, does Google. iOS and Android are designed solely for mobile devices to the extent that all keyboards available for them, even the best ones, are hacks. A keyboard is a natural accessory to a Windows 8 tablet.

And as big as Apple's lead is, it's certainly not too late for Microsoft. I have no trouble believing that given a preferable alternative, users would declare iPads old hat and flock to something else. It might just be that Apple is behind the times.

I was at the launch event in Chelsea at Pier 57 and I have to say Microsoft made a really impressive presentation. It made sure to show how easy it is to multitask and "snap" multiple programs on the display, something a certain competing OS cannot do. There were many mentions of business needs and how Windows 8 PCs have the features, like TPM, that enterprises want, but the show was overwhelmingly about consumer use. 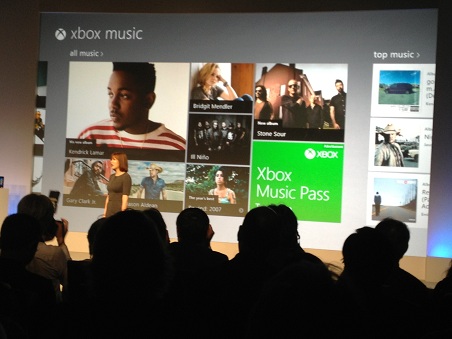 Surface users can stream from a library of 30 million songs on Xbox Music for free.

Here are some of the highlights of the event: 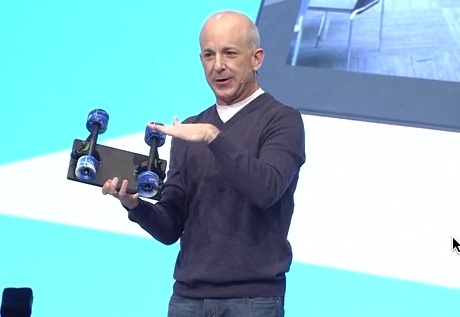 To emphasize how sturdy Surface is, Microsoft made a skateboard with a Surface as the platform and Steven Sinofsky skateboarded on it. They also did a live drop test of a Surface on stage. Click here to see some Surface drop test videos.

For me the biggest wild card is the Windows store, where you get your apps. If Microsoft can accomplish rapid growth of desirable apps in the store then it doesn't just have a chance, it has a really good chance of being very successful. If it doesn't get that growth, it has a really big problem. Right now, for instance, there's no Facebook app, no Dropbox. There is no Starbucks app! You'd think they'd lean on a local company like that to do better.

Microsoft touts the favorable developer terms in the Windows Store, that it's open in 231 markets and 109 languages, that the number of apps has doubled in the last few weeks, and that it has more apps than any competing store at its opening. On the other hand, there's no Gmail app, for heaven's sake. But if this is the big question then you have to think they can solve it. After all, a problem like that can be solved by throwing money at it, and Microsoft is not above that.

So is it really the end of the tablet era already, and the beginning of the touch PC era? What do you think? Give us your opinion in our new Facebook commenting system below.

How to Submit a Column to InformationWeek InformationWeek Staff 4/9/2021
White Papers
The Essential Guide to Securing Remote Access
The Impact of the SolarWinds Breach on Cybersecurity
Simplify Your Application Security
Dark Reading Report: Battle for the Endpoint
Smart Service Management: Working Better Together with a Connected Enterprise