Surface 2 and Surface Pro 2 don't look much different than their predecessors but boast better chips and more battery life.

Microsoft VP Panos Panay, who presided over the event, said the Surface Pro 2 uses Intel's i5 "Haswell" processor. He said the chip means the Surface Pro 2 runs 75% longer between charges than the current model, whose battery life has been one of its most criticized features. The improvement should translate to between seven and eight hours of battery life.

[ Trying to integrate tablets into your workforce? Read The Good And Bad Of Tablets At Work. ] 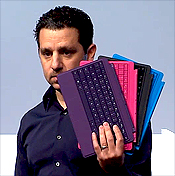 Panay said the Surface Pro 2 is faster than 95% of laptops on the market, and he repeatedly asserted that it is the best mobile option for professionals.

"It's one of the best products Microsoft has ever built," he said.

The Surface 2 drops its forebear's "RT" branding but still runs Windows RT, unlike the Surface Pro and Surface Pro 2, both of which run the full version of Windows 8, with support for both Modern UI touch apps as well as legacy desktop apps. Panay touted Windows RT 8.1's benefits over not only the earlier version but also other tablets. Those benefits include support for Microsoft Office -- including Outlook, a new addition -- and mutli-tasking capabilities.

The device runs on Nvidia's Tegra 4 processor, which makes it noticeably faster than its ancestor, and competitive with many tablets in its class. It uses the same 10.6-inch ClearType Full HD display as the Surface Pro, switches out its USB 2 port for USB 3, and includes a 3.5-megapixel front-facing camera whose sensor is designed to keep Skype chats looking good in poor lighting. It also includes a 5-MP rear camera.

The Surface Pro 2 will come in black, like the original, whereas the Surface 2 includes both a black version as well as an attractive "magnesium" option.

Yep, I was surprised too. An iPad does what it's supposed to be out of the box; when people throw keyboards on them, the accessories are supplements, not something crucial to the device's appeal. But with the Windows Store being what it is, Windows tablets rely much more on keyboards.

Do I use my Surface Pro without a keyboard? Yes-- but the keyboard is still the thing that makes its desktop compatibility useful, and that helps make using a Surface Pro different (in a potentially good way) than using an iPad. If Microsoft has just thrown the Type Cover in, I'd consider the event a solid, but not necessarily overwhelming, success. They'd still be able to upsell people (especially Pro users) to the Power Cover, but they'd avoid the perception of market-deaf pricing. But with the current structure, consumers are going to feel nickel and dimed.

The new machines look much nicer and I'm looking forward to playing around with them more extensively. But at these prices, and with keyboards and docks adding hundreds more to the "true" cost, I think the new devices face many of the same questions that the previous ones faced.
Reply  |  Post Message  |  Messages List  |  Start a Board

Also, MS should have never used "RT" in the name of the product. Windows RT -- and thereby the Surface RT device -- confused consumers (and why wouldn't it?). They didn't know what Windows RT was ... "Is it the same thing as Windows 8?" Now Microsoft just replaced RT with a 2 for Surface 2, but they've also added a 2 to the Surface Pro name. Sigh.
Reply  |  Post Message  |  Messages List  |  Start a Board

The Skype and SkyDrive storage freebies are nice features, but I'm shocked they are still charging $119 and $129 for the touch and type covers even if they are thinner, lighter and more rigid. The pricing on the power cover and docking station also seem aggressive. Improved battery life is a big plus, but there's not enough new here to motivate me to buy a Surface. Does anyone disagree?
Reply  |  Post Message  |  Messages List  |  Start a Board
InformationWeek Is Getting an Upgrade!