Microsoft, which surprised the tech world with its announcement of the Surface RT in June, might have another surprise in store--its price. According to an inside source at Engadget, the Surface will be priced at $199 when it goes on sale on Oct. 26.

The anonymous source is said to have received the information from a recent TechReady15 conference, where the complete details of the launch were disclosed.

If the rumor is true, the Surface would be tied for least expensive tablet with other $199 tablets, such as the Google Nexus 7, and would also best all others on cost per screen size, putting downward pressure on the iPad. The tablet/ultrabook hybrid features a 10.6-inch screen, full-size keyboard, and a built-in kickstand.

Just this week Microsoft announced that Dell, Lenovo, Asus, and Samsung will manufacture Windows RT tablets. At $199, the Surface will certainly be sold below cost. Microsoft also is reportedly charging OEMs as much as $85 per device to license Windows RT, which would make competing with Microsoft impossible. Toshiba said it would not manufacture a Windows tablet.

The Surface inherited its name from the now-forgotten table top and wall-mount version running Windows Vista. 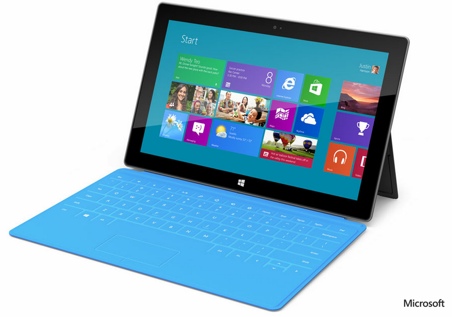