Microsoft drops Surface Pro 2 prices by $100 to $200, days ahead of Surface Pro 3 availability.

With Microsoft's Surface Pro 3 hitting stores this Friday, it seemed like only a matter of time until Microsoft began discounting its older Surface Pro 2. Heading into this week, some Pro 2 configurations actually cost as much as comparably built Pro 3 models.

Sure enough, the company slashed prices this week across the Pro 2 range by between $100 and $200 in its online store. If you've been on the fence about a Surface Pro 2, the device is more affordable than ever.

Whether Microsoft's second-gen Pro is affordable enough is still debatable, however. The base model offers a 64-GB SSD, 4 GB of RAM, and a fourth-generation Intel i5 processor for $799. That's $100 less than before, but Type Cover keyboards are still sold separately, for another $130. Though $930 isn't anyone's idea of a budget-friendly laptop, the lower cost might be tempting for on-the-go professionals who want a capable device with a small footprint.

How does that compare to Microsoft's newest tablet? The entry-level Pro 3 includes a 64-GB SSD and 4 GB of RAM for $799 -- just like the cheapest Surface Pro 2. But it's not exactly an apples-to-apples comparison. 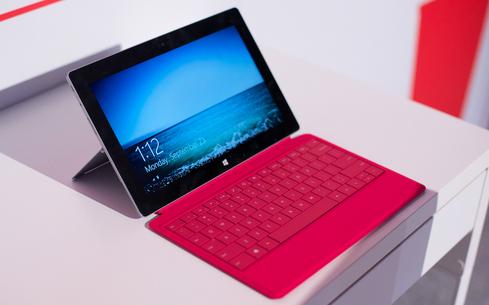 The base Pro 3 uses only an i3 processor, which arguably gives the older tablet an advantage. But the Pro 3 offers a 12-inch, 2,160x1,440-pixel screen, compared to the Pro 2's 10.6-inch, 1,920x1,080-pixel display. Despite the bigger display, the Pro 3 is also lighter and thinner than its predecessor. The Pro 3's infinitely adjustable kickstand is an improvement over the Pro 2's two-position model, and the Pro 3's digital pen blows the earlier model's stylus out of the water. The Pro 3 also offers a 3:2 aspect ratio, instead of the 16:9 displays in earlier Surfaces.

Microsoft's new base pricing, in other words, balances the Surface Pro 3's more functional design against the Pro 2's faster processor and smaller (but heavier) footprint. As for the upmarket models, the Pro 3's i7 configurations, which cost as much as $1,949, are in a different category, since no Pro 2 model comes with this class of chips. Otherwise, prices for i5-based Pro 3 models outpace those of middle-market and high-end i5-based Pro 2 options, though the margin isn't always large. The Pro 3 with a 128-GB SSD, 4 GB of RAM, and an i5 processor is $999, or $100 more than a Pro 2 with the same specs. The Pro 3 with an i5 chip, 8 GB of RAM, and 256-GB drive is $1,299, or $200 more than a Pro 2 with similar internals.

Another important consideration: Not all Surface Pro 3 models will ship at the same time. Only the 256-GB model with an i5 processor will be available this week. The 128-GB version, also with an i5 chip, will hit the market June 30. If you want an i3-based or i7-based machine, you'll have to wait until late summer.

If you can't delay a purchase that long, the new Pro 2 prices might be a lucky break. But it's always possible Microsoft will further reduce second-gen tablet prices once more Pro 3 models are available. In the meantime, the original Surface Pro is also an option. Stock levels appear largely depleted, but certain configurations are still available from big box vendors. Best Buy's website currently lists a Pro with a 256-GB drive and 4 GB of RAM for $649.

InformationWeek's new Must Reads is a compendium of our best recent coverage of the Internet of Things. Find out the way in which an aging workforce will drive progress on the Internet of Things, why the IoT isn't as scary as some folks seem to think, how connected machines will change the supply chain, and more (free registration required).

Michael Endler joined InformationWeek as an associate editor in 2012. He previously worked in talent representation in the entertainment industry, as a freelance copywriter and photojournalist, and as a teacher. Michael earned a BA in English from Stanford University in 2005 ... View Full Bio
We welcome your comments on this topic on our social media channels, or [contact us directly] with questions about the site.
Comment  |
Email This  |
Print  |
RSS
More Insights
Webcasts
People Are The Most Important Part of Autonomous SOC
Nip Ransomware in the FUD: Detecting Attacks Pre-Encryption
More Webcasts
White Papers
SUNBURST: Underlining the Importance of Right of Boom Risk Mitigation
How Secure Are Your Endpoints?
More White Papers
Reports
Are Unprotected Cloud Databases Leaking Your Data?
How Data Breaches Affect the Enterprise (2020)
More Reports
Copyright © 2021 UBM Electronics, A UBM company, All rights reserved. Privacy Policy | Terms of Service