Will Microsoft's attempt to revamp Office with a touch interface leave behind its core users?

A new version of Windows isn't the only thing in the offing from Microsoft. There's also a new version of Office--and if Microsoft is planning a revamp of Office to match its revamp of Windows, it needs to remember something: Windows 8 might be for tablets, but Office inherently is not.

First, the facts, scanty as they are. What little is publicly known about "Office 15" right now comes mostly by way of a blog post by PJ Hough, corporate vice president of development for Microsoft Office. Hints are dropped about this being the most ambitious undertaking yet for the Office division, and how Office is being synchronized with a great many other Microsoft projects that work side-by-side and hand-in-hand with it.

Most of the horn blowing in that post, however muted and indirect it is, revolves around services: Office 365, Exchange, SharePoint, the ever-present cloud, and so on. All of that ought to cheer most of the major customers for Office 15--those being enterprises, workplaces, and corporate customers. Those are the folks who make aggressive use of the things in Office that to the rest of us seem like incremental or off-topic additions, and are happy to pay for the next version when the rest of us are skipping an upgrade.

There's another possibility as to what's showing up in Office 15. Given the amount of work Microsoft put into Windows 8 to give it a touch UI, what are the chances Office's next revision also will be geared to work that way?

In the abstract, it makes sense. Microsoft is putting that much more of its energy toward getting Windows on tablets--and getting Windows applications on tablets as well. That might well mean the next generation of every desktop app coming from Microsoft will in some way be Metro-ready, because what good is a touch-centric Windows without plenty of familiar apps to run in it? 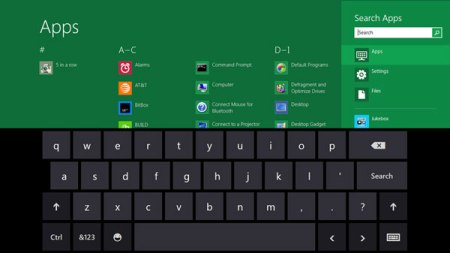 There's only one problem with this idea: it's a total misreading of markets for both Office and tablets.

Almost everyone who buys a tablet of some kind uses it as a secondary device--a media consumption device, a browsing portal, what some like to call a "lean-back" device. When tablet users do "serious" work--assuming they do any at all, which is not meant as a criticism but simply a description--it's on a notebook or a full-blown desktop PC.

Tablets by their very nature don't lend themselves to the kind of content creation that involves a lot of typing. I am willing to believe that might well be a matter of the user's accommodation to the technology rather than the tech itself being limited, but I remain skeptical. Last year I was at a convention, laptop at the ready, while the woman next to me had her iPad out. She was doing a remarkably good job of keeping up with the presentation as she typed, although I couldn't help but notice the one key she used more than any other was backspace. (The fellow next to her had an iPad with a keyboard attachment. His accuracy was, not surprisingly, much higher.)

The Office suite is all about the keyboard, and until either the tech or the user acclimation to typing on tablets reaches a certain point, I suspect most tablet users simply won't bother with Office. Granted, you can always attach physical keys to most any tablet, but then you've defeated the whole purpose of the device: why not just get yourself an actual notebook and be done with it? You'd probably save more than a few bucks. And you wouldn't have to keep a screen-cleaner cloth on hand all the time either.

A touch-centric version of Office would be at best a niche filler, because the vast majority of people who would bother to use Office at all would be on a notebook or full PC to begin with. All the others--the people who use Gmail instead of Outlook, Google Docs instead of Word, and whose content creation consists mostly of tweets and Facebook updates--don't miss Office in the first place.

Another problem I have can be summed up in one word: Metro.

If the Metro interface is Microsoft's one-size-fits-all way of making apps touch friendly, giving Office a Metro front end is going to be one of the best ways to make it nearly unusable. I hated Metro in the Windows 8 Community Technology Preview, not because of the fact that it was a touch interface per se but because in Microsoft's zest to make things simple, it also threw out a lot of functionality I depend on. After the screaming that erupted when Microsoft unveiled the ribbon interface, I have the feeling a Metro version of Office will cause an uproar that can only be gauged on the Richter scale.

If Microsoft does give Office a "Metro mode," here's hoping it's just that: a mode, a facet of the program instead of the way to use it. I could see, for instance, the document-preview mode in Word being a natural for Metro, or the presentation mode in PowerPoint being great as a Metro app.

If that's what Microsoft has in mind, fine. But to make the default Office interface into something Metro-centric would be anathema.

Yet, from what I see, Microsoft has no choice but to try and make Office "touch-friendly." Office is as much a platform as Windows, and for Microsoft not to try and extend it in yet another predominant market direction is commercial suicide. Microsoft just needs to do it without alienating the very customer base that buys Office to begin with.

And all those people have keyboards.

Full disclosure: This article was composed in Office 2010 on Windows 7 using a desktop PC.

We welcome your comments on this topic on our social media channels, or [contact us directly] with questions about the site.
Comment  |
Email This  |
Print  |
RSS
More Insights
Webcasts
People Are The Most Important Part of Autonomous SOC
Nip Ransomware in the FUD: Detecting Attacks Pre-Encryption
More Webcasts
White Papers
How to Build Your Incident Response Plan
Supercharge Incident Response with DDI Visibility
More White Papers
Reports
Improving Security by Moving Beyond VPN
2021 Top Enterprise IT Trends - Network Computing
More Reports