Microsoft on Tuesday announced the Surface Pro 3, a larger yet thinner, lighter, and more powerful version of its flagship tablet. The company did not reveal the long-anticipated Surface Mini, defying weeks of speculation and a number of high-profile reports.

But Microsoft could still have a winner in the 12-inch Pro 3. Differentiated by not only by its screen size and impressive engineering, but also an advanced digital pen whose functions are baked deeply into the system, the device represents Microsoft's best attempt yet at Apple-like harmony between software and hardware.

Touted as the thinnest device ever built around Intel Core chips, the Surface Pro 3 is only 0.36 inches thick and weighs just 1.76 pounds. It boasts a 2160x1440-pixel screen, USB 3.0 port, microSD card reader, and Mini DisplayPort. As rumored, it will be available in multiple configurations, starting with an Intel i3-based model with 4 GB of RAM and a 64 GB SSD for $799, all the way up to an i7-based version with 8 GB of RAM and 512 GB of storage for $1,949.

The Surface Pro 3 also includes a new kickstand that can be positioned at virtually any angle. It should be substantially more versatile than the two-step kickstand offered in second-generation devices. Microsoft also debuted larger Type Cover accessories that can fold toward the screen, magnetically locking to provide additional stability for lap use. The laptop accessory is still sold separately, for $129.99. 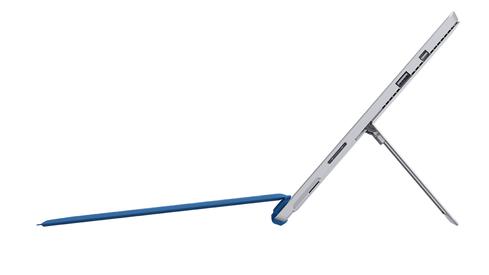 The new Type Cover can fold toward the device for added stability.

The device's most notable feature might be the new Surface Pen. Microsoft VP Panos Panay, who introduced the tablet at an event in New York, said the included accessory is designed to feel as intuitive as traditional pen and paper -- not like the cheap, limited-function styluses most of us have come to know and rarely use.

Panay demonstrated a variety of use cases to back up his claim. The device can wake from sleep directly into OneNote as soon as the user touches the Pen to screen, a use case that Panos said mimics the spontaneous creativity of writing in a notebook. The device's 4:3 aspect ratio, a departure from earlier versions' 16:9 displays, was chosen because it makes holding the device feel like holding a pad of paper, he said.

The Surface Pro 3 can easily store notes in OneDrive, and will also boast exclusive pen support from a number of vendors. Microsoft's presentation included demonstrations of pen-optimized Adobe apps, such as Photoshop, as well as popular screenwriting program Final Draft. Panay also mentioned that many core medical and architectural apps would be optimized for the Surface's touch and pen inputs as well.

Panay acknowledged that MacBooks and iPads are popular, but argued the Pro 3 can replace both. He repeatedly illustrated the point by placing Microsoft's tablet on a scale, first alongside the heavier MacBook Air, which measures 0.68 inches at its thickest, and then next to a Macbook-iPad combo. He argued that the Pro 3 offers not only the size and power of a laptop, but also the mobility and touch functions of a tablet, as well as versatile pen functions found in no other product.

Panay argued last year that the Surface Pro 2 was a similarly revolutionary device -- and both sales figures and the Pro 3's aggressive changes demonstrate that this wasn't really the case. This time, though, Microsoft might have a winner, according to Jack Gold, principal at research firm J. Gold Associates.

The Surface Pro 2 "is not a general purpose tablet aimed in no particular direction," he said in an emailed statement. Indeed, Microsoft admitted in an SEC filing that it's having trouble competing with iOS and Android for average users. With the new device, the company has instead narrowed its focus to its base of business customers.

"Directly targeting the high end of the enterprise market with full Windows compatibility across all apps is an area where Microsoft can win and it doesn't need to sell tens of millions of this device to be successful," Gold wrote.

Microsoft still faces an uphill struggle. In Apple's most recent quarter alone, iPads generated almost three times more revenue than the Surface line has in its entire history. Moreover, iPads are already ubiquitous in the enterprise, and Office for iPad has been exceedingly well-received, generating more than 27 million downloads. But Gold said the Pro 3 "may be enough to swing users its way."

Roy Chomko, president of web development firm Adage Technologies, was also impressed. In an email, he called the device "another step in the right direction" toward tablet-laptop hybridity. He said Microsoft seems to have listened to its customers, adding that, "As with most Microsoft efforts, they seem to have gotten it right on the third try." 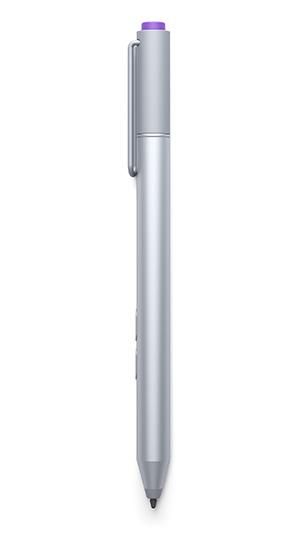 The new Surface Pen is designed to feel like a familiar fountain pen, not a cheap stylus.

And what about the Mini?

Carolina Milanesi, chief of research at Kantar WorldPanel, said in an email that the mini-tablet market represents volume, not value. Large-screened smartphones, or phablets, have eaten into sales of smaller slates, and to offer competitive prices, Microsoft would likely have been forced to sacrifice build quality, profit, or both. If Microsoft produces an 8-inch device, Milanesi said it might fit better under the Nokia banner.

For now, the company is squarely focused on the new Pro. Microsoft released several accessories for the tablet, including the aforementioned Type Cover. It features a larger, more responsive track pad, which Panay admitted was in response to criticism over earlier models. Microsoft also announced a Docking Station for $199, potentially useful for those interested in desktop-style productivity, including support for 4K monitors.

Michael Endler joined InformationWeek as an associate editor in 2012. He previously worked in talent representation in the entertainment industry, as a freelance copywriter and photojournalist, and as a teacher. Michael earned a BA in English from Stanford University in 2005 ... View Full Bio
We welcome your comments on this topic on our social media channels, or [contact us directly] with questions about the site.
Comment  |
Email This  |
Print  |
RSS
More Insights
Webcasts
Data Protection Strategies and Secrets - 12/10 @ 11am EST
Defense and Response Against Insider Threats & User Errors
More Webcasts
White Papers
Exclusive IT Trend Report: Chatbots
5 Key Steps for Assessing Your Security Effectiveness
More White Papers
Reports
Top 10 Security Technology Trends to Watch, 2020
2020 Threat Hunting Report
More Reports

By what I can tell, it seems like a solid hybrid (tablet, laptop and desktop), and the fact that it has a docking station makes it wonderful. I just hope security is not compromised due to it being able to open a notepad by the touch of a pen, but I am sure that Microsoft would have already thought about security.
Reply  |  Post Message  |  Messages List  |  Start a Board

I'm surprised nobody mentioned that the new Pros are pricy ($2k for an i7, yuk).

I was wondering, wouldn't people, business or otherwise be better off getting a laptop-hybrid or an all-in one laptop/desktop/tablet?
Reply  |  Post Message  |  Messages List  |  Start a Board

Great question, David! I'll try to find out. I agree that it would be useful if the user can choose apps other than OneNote.
Reply  |  Post Message  |  Messages List  |  Start a Board

The use case of having the device wake and open OneNote at the tap of the stylus pen is interesting, but I immediately wondered whether you could pick another app to have that functionality. Thinking of medical note taking, which is one case where the users (doctors and nurses) often complain that digital systems are less flexible than pen and paper.
Reply  |  Post Message  |  Messages List  |  Start a Board

At 12-inches can we really call this a tablet with a straight face? We've come to love tablets for their portability. I know Surface Pro 3 is light, but it's too wide to be a tablet as we've come to define a tablet. But semantics aside, kudos to Microsoft for merging light-weight hardware and more-streamlined software options. I agree with Gold's assessment that the Surface Pro 3 is for high-end enterprise users. The ship has sailed for iPad-loving consumers. They're just not that into you, Microsoft.
Reply  |  Post Message  |  Messages List  |  Start a Board

Anyone out there disappointed Microsoft passed on a mini model?
Reply  |  Post Message  |  Messages List  |  Start a Board

Yeah, the extent to which the pen excels is the extent to which the Surface Pro 3 will break out. Bigger screen, lighter weight, better kickstand-- all of that's nice, and will help Microsoft gain share. But I don't think those things alone make Apple tremble. The pen could be a different story. I rarely use the stylus that came with my Surface Pro, but the new use cases and technology look compelling. I'm looking forward to spending some time using the pen, and will write a future story to explore whether it delivers.

I've always preferred Macs because I do a lot of photo and video work, and have liked using Aperture, Final Cut and other Apple programs more than I have their Adobe counterparts. The Surface-optimized Photoshop app demonstrated during the event, though, could make me reconsider. I've also preferred OS X to Windows 8.1, but the way Microsoft is integrating ink and OneDrive not just into apps, but also throughout the OS-- very encouraging. They're creating new interaction paradigms, rather than just trying to smash a laptop into a tablet's form. The new Surface isn't a device for everyone, but Apple's owned the $1000+ computing space for a long time, and with this tablet, Microsoft could take a decent chunk of the market.
Reply  |  Post Message  |  Messages List  |  Start a Board

Haha, touché. I don't consider them unfamiliar, but perhaps I'm missing something. Anyway, if the pen works as well as the demonstration indicated, the Surface Pro 3 could turn heads. Up until today, if someone told me he wanted to spend $1000 or more on a new computing device, I'd almost certainly have advocated some kind of MacBook. Now I'm not so sure. I'll be curious to see how it handles in person.

Also, I appreciate that you used "whom"; it deserves more defenders. :)

The world's first Windows 8.1 - Android Hybrid also launches this week and offers impressive features  the Ramos i10 Pro ($399) is the first Dual-boot hybrid on the market and makes it easy to switch between using the two operating systems and offers a 10-inch, full HD display, an Intel Bay Trail 64-bit processor, Bluetooth, GPS, plus a 8000 mAh battery with 9 hours battery life.