50%
Tweet
Microsoft has packed its wearable Band with advanced sensors, cloud-powered health insights, and an affordable price. Is Microsoft ahead of the curve in this new mobile market?

Using calendar data, Microsoft Health might recognize whether the number of meetings in your day is affecting your sleep quality, or if your stress levels rise when you have meetings scheduled at a specific time. Similarly, Microsoft's app might compare exercise data from recent workouts to food data you've logged over the same period, which could help you to find the right balance between diet and athletic performance. Microsoft Health will soon integrate with Microsoft HealthVault, which can securely share data with a medical provider.

All in all, Microsoft's pitch is intriguing, if Band's sensors are accurate and if Microsoft Health's Intelligence Engine is as good as advertised. But those are big ifs. Privacy, of course, is another huge concern.

4. Band isn't just for fitness buffs.
Though aimed primarily at fitness enthusiasts, Band could appeal to other types of users as well. If Microsoft Health can really provide insights that address poor sleep and high stress, many people who've never been to a gym might be interested, for example. Microsoft also says Band can track UV exposure, a metric that has more to do with general health concerns than fitness in particular.

Band's 1.4-inch color touchscreen offers 320x106-pixel resolution and a tile-based interface that should be familiar to Windows Phone 8 and Windows 8 users. Via the screen, Band can receive notifications and emails from a paired smartphone. Users can reply by tapping pre-defined responses. Band also provides access (with limitations -- see Item 6) to Cortana, the Windows Phone virtual assistant. Cortana can provide information on specific topics, such as traffic conditions or sports scores. Band also has an onboard microphone so users can use Cortana for dictation or to set reminders. Band's screen can also display codes that can be scanned for mobile payments, though right now the functionality is limited to Starbucks.

5. Microsoft's wearables strategy is extremely open.
Microsoft has positioned Microsoft Health as a platform, not only for Band, but also for third parties. At launch, Microsoft announced Health will work with services from Jawbone, MapMyFitness, MyFitnessPal, and RunKeeper. Microsoft expects to add support for additional third-party products and services soon. 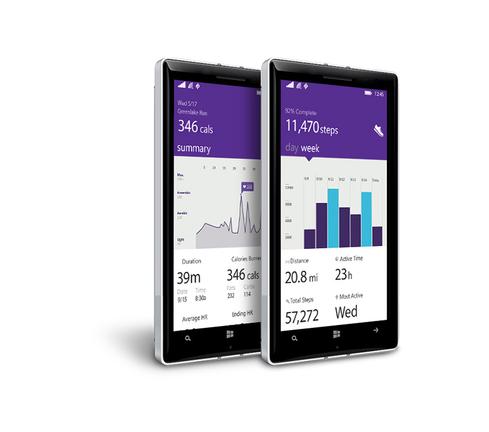 Microsoft Health is available not only for Windows Phone, but also for Android and iOS.

Just as importantly, Band isn't tethered to Windows Phone. Some smartwatches -- such as the upcoming Apple Watch -- will only work when paired with a compatible smartphone from the same manufacturer. Band requires a smartphone, but Microsoft supports Android and iOS in addition to Windows Phone. Given Windows Phone's lowly market share, Band would have been DOA if Microsoft had tried to position its new wearable as a pure ecosystem play. But even if Microsoft's hand was forced, Band is more evidence of Microsoft's new cross-platform strategy.

7. Band provides fewer limitations than many direct competitors.
Compared to most competitors, Band is very well-rounded. As noted, it's cheaper than many other options and supports all major smartphones. Thanks to its GPS capabilities, it also

The article described the requirement to wear the watch to build up a history, it even stated that it could track sleep patterns to show the type of rest you encounter during the night.

How do you charge the device while sleeping?  These smart watches need to be able to run a month or more to be useful, maybe even a year.  If it is in a tracking mode maybe it shouldn't display anything until it has enough data for a useful download and have a simple second battery to display real time of day.

It isn't useful if it can't collect the data, and real time data (no history) isn't very useful
Reply  |  Post Message  |  Messages List  |  Start a Board

More use cases should be supported instead of simply recording your body data for healthcare purpose. For sure it will push for adoption. Another concern is the price - how will the price look like when it's on market?
Reply  |  Post Message  |  Messages List  |  Start a Board

@malharden & jgherbert
Is it a coincidence that the coverage of MSFT devices starts with the word "issues" in the title, while the coverage of Apple devices is generally warm and flowery?

Reading the nine key issues, we could certainly use "points", "topics" or "considerations" instead, don't you agree?
Reply  |  Post Message  |  Messages List  |  Start a Board

I think Microsoft band will make a greater impact becuase of its connectivity with healthvualt.  Healthvault allows for people to access and understand their information much better. The problem I see is that there is very few people interested with PHRs in general.

smart watches don't have the utility factors as smartphones.  I really believe if they can be used in specific setting such as home based care or telehealth this will really push their adoption among people.
Reply  |  Post Message  |  Messages List  |  Start a Board

This is a concern for tech age. At the begining we are all excited about the convenience and the fancy part of the new product. Soon at least some of us will get tired of wearing all these devices everyday and pay attention to the data gathered/analysis report generated. But let's see how it will move forward - when consumers are tired of old products, something new will definitely show up.
Reply  |  Post Message  |  Messages List  |  Start a Board

I am skeptical about this product  as usual. I do not know whether having so many gadgets on your body is really worth it and how accurate it is going to be. And do we need to know all the readings from our body all the time. I think it will be a norm slowly but how  many people are ready to embrace it is a wait and watch game. We are going to be slaves to technology soon if we are already not....
Reply  |  Post Message  |  Messages List  |  Start a Board

The problem I have with wearables of this sort, whether from Microsoft, Apple, or Google, is that they're niche products with mass market pretensions. Smartphones make sense -- there's a benefit to having a small Internet-connected computer in your pocket. Watches that convey notifcations, are tied to smartphones, or independently offer communication and biometric data services make sense only to a subset of the smartphone audience, and probably not a very large subset.

Wearables like this show the tech industry acting like Hollywood -- we had a hit with the smartphone, now let's make it again as a wrist-mounted device.
Reply  |  Post Message  |  Messages List  |  Start a Board

@rradina, I believe your skepticism is justified. I think those sorts of corporate wellness programs will start to become more common, but I also have reservations about them. In terms of policy precedents, I'm not sure it's a great idea to give corporations more control over employees' private lives, since I already consider the employer-employee dynamic to be pretty one-sided in favor of the former. I also think some of these wellness programs, while potentially useful and arguably well-intentioned, somewhat sidestep political and economic issues related to rising health care costs. These concerns aside, I think wearable technology has the potential to positively affect user health. Privacy concerns and skepticism are necessary-- but I'm holding out at least some optimism.
Reply  |  Post Message  |  Messages List  |  Start a Board

"Microsoft still finds a way to set the barn on fire with all the horses inside." It's true, isn't it! However, I think competitors count MS out of any market at their peril. It certainly has the money to stay the course and undercut competing offerings in most areas, should it choose to. To wit, some recent poll data, below. Maybe it's fine with third, biding its time until a market leader stumbles.