50%
Tweet
The latest Windows Phone upgrade, code-named Mango, is flying out of the gate with better integration, speech recognition, and cloud capabilities.

Microsoft Windows Phone 7.5 updates started to roll out to the first generation of Windows Phone smartphones last week. The biggest surprise? The rollout is going smoothly--unlike the last one, the relatively minor NoDo update, which by comparison had many problems including failed updates and a schedule that dragged on for months for some devices. This rollout is proceeding so well that just six days into the update cycle Microsoft announced it would increase to 50% the number of devices targeted for upgrade. 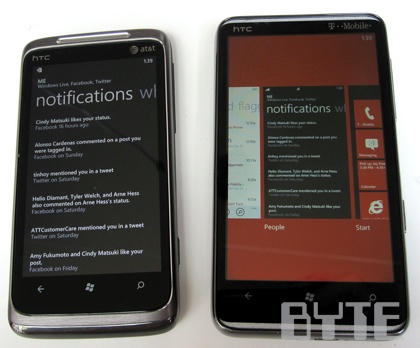 Another surprise is how well Windows Phone 7.5 compares to some of the iOS 5 features that Apple revealed during the iPhone 4S announcement on October 4. Microsoft integrated Twitter, just as it did with Facebook for the Windows Phone 7 release. The Me Hub in particular has become a lot more interesting and useful. It now lets you post to Twitter, Facebook, Windows Live, and LinkedIn simultaneously. You can also perform check-ins, read notifications from all four services, and review your own posts, all from a single interface.

Speech recognition received major enhancements with the 7.5 upgrade, too. Though it does not have quite the content reach that Apple's Siri does, Windows Phone 7.5 users can send text messages, check voice mail, open apps, and search the Web using voice commands. Voice dialing and talking Caller ID are also available.

Windows Phone 7 had a fragmented cloud access strategy at best. Photographs but not video could be uploaded to Windows Live SkyDrive. Microsoft OneNote Mobile could sync with SkyDrive--but not Word, Excel, or PowerPoint. Windows Phone 7.5 unifies cloud storage and synchronization. Photos can be automatically synced with SkyDrive. Photo albums stored locally, in Facebook, and in SkyDrive all are accessible from the Pictures Hub. Microsoft Office mobile components can access documents stored on the phone, on SkyDrive, in an Microsoft Office 365 account, or on an enterprise SharePoint server.

The big remaining question is whether the multi-billion dollar bets taken by Microsoft and Nokia will actually enable Windows Phone to move from its current last-place position in the smartphone market to a strong second behind Android in 2015 as predicted by Gartner and IDC. Both companies project Windows Phone will have about 20% of the market, compared with Android's 45% and less than 18% for iOS.

Nokia has yet to unveil its Windows Phone hardware, software, and services. This information will be revealed, however, at Nokia World 2011 on October 26 and 27 in London. Nokia, Microsoft, and other partners are scheduled to speak during this event. Speakers include Nokia CEO (and former Microsoft executive) Stephen Elop, Microsoft corporate vice president of the Windows Phone Program Joe Belfiore, and numerous partners. These partners include Quickr, LinkedIn, CNN, Rovio, Viacom and China Mobile.

Based in Honolulu, HI, Todd is a founding senior contributor at BYTE. Todd has published numerous books and articles on technology and is a Microsoft MVP in mobile technology. Follow him on Twitter as @ToddOgasawara.

We welcome your comments on this topic on our social media channels, or [contact us directly] with questions about the site.
Comment  |
Email This  |
Print  |
RSS
More Insights
Webcasts
Unlocking the Ultimate Source of Truth in Cloud Security--Network Data
SecDevOps: Tying Security to Your Application Development Processes
More Webcasts
White Papers
DevOps for the Database
The ROI Of SD-WAN: Not Just A Numbers Game
More White Papers
Reports
Special Report: Edge Computing: An IT Platform for the New Enterprise
How IT Security Organizations are Attacking the Cybersecurity Problem
More Reports