50%
Tweet
Booth babe pictures are so 2011. So we give you the men of Mobile World Congress, in all their geeked-out glory.

The time-honored tradition of booth babes at trade shows continues to endure, especially in the technology industry, and regardless of evolved cultural norms. The tech industry assumes that sex sells, even at Mobile World Congress, Barcelona, where, during the first couple of days, you can smell plenty of Drakkar Noir and catch a whiff of many breakfasts on the breath of the hundreds of attendees locked shoulder-to-shoulder beside you.

In other words, people will come by exhibits whether there's a silicon-enhanced dancing column or a bucket of Jolly Ranchers on the table, and sometimes the candy is the more important draw.

Still, some publications, which we'll not name, feel the need to produce image galleries of booth babes, and others even write about stunts like CBOSS' contest to win dinner with one of their smoking-hot dancers (it's just an observation; don't shoot the messenger).

We, of course, wouldn't stoop to such a low and inglorious level. Instead, we set out to take pictures of…men. Yes, the Men of Mobile World Congress, in all their fabulous, away-from-home, tapas-fueled glory. 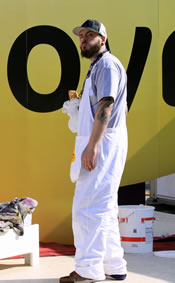 Let's start with this guy--part of the marketing efforts of Joyn, a consortium of carriers banding together to stop the threat of "over the top" (OTT) content, which aims to threaten their collective businesses. He's got all the right stuff -- the scraggly beard, the tattoo, the earring and the "I'm thinking about killing you for your cafe-con-leche" look, which is only mildly betrayed by his "I'm a painter" garb. 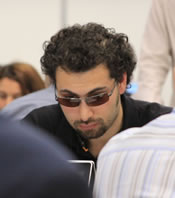 The press room, or "Media Centre," at Mobile World Congress was buried deep in the bowels of Hall 2, with no flowing air and no sunlight (despite a brilliantly sunny week in Barcelona). But Rico Suave here seemed to be making a statement with his sunglasses--sort of a "I just got off my Ducati to come write this article" look. 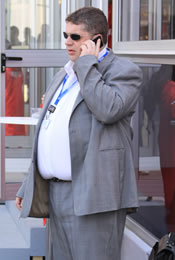 This was not an infrequent look at Mobile World Congress. We assumed he was calling home to tell the wife he'll be having his food baby very soon. But seriously, dude, you shouldn't be smoking while pregnant. 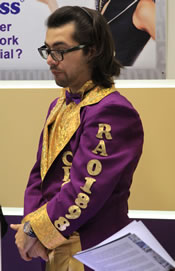 "I'll get right back to the Mobile World Congress, just as soon as I finish fighting Lord Voldemort." (Oh wait, Hermione just rang and asked for her headband back.) 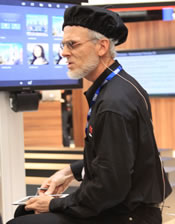 Four score and seven years ago…or maybe it was just this week at Mobile World Congress, Abraham Lincoln showed up at the Adobe booth, donned a beret and a ridiculous French accent. 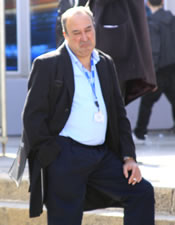 This man needs a hug. He's had too many dropped calls and he made the mistake of having paella for breakfast. Or maybe Rico Suave stole his Ducati.

Ah, the fresh smell of metastases in the morning...sometimes being at Mobile World Congress was like being in a cancer incubation machine. At one point, we actually saw an ashtray so filled with cigarettes outside of one hall it was on fire and blowing the cigarette smell into the hall. The surgeon general has warned that Mobile World Congress causes lung cancer, heart disease, and may complicate pregnancy. Or as they say in Spain: Fumar Mata. 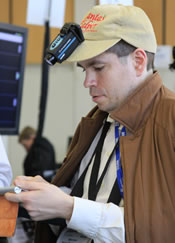 Is that a camera on your hat, or are you just happy to see me? Seriously though, this is a geek's geek. We spotted him at all of the various press events with his tablet, and his, um, cape, filming everything he saw. Speaking of which, THAT footage might be worth seeing… 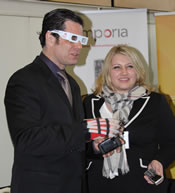 Now THIS guy looks familiar: our own David Berlind. He found a new sense of fashion in Barcelona with these super-hip glasses and his nearly Michael Jackson-like gloves.