Mac as a Tablet? - InformationWeek

50%
Tweet
The Modbook Pro transforms the MacBook Pro into a device that mimics a tablet, without a touch screen.

The OSX tablet is here.

The Modbook Pro is a near total conversion of a mid 2012, 13.3-inch MacBook Pro, transforming the laptop into a device that is startlingly close to a tablet. With a slate-like appearance, Modbook replaced the MacBook's display with a "Penabled" pen tablet digitizer from Wacom. While the Modbook Pro does not have a touch screen – OSX does not support a touch screen at present – the pen, the company claims, helps makes the machine "tablet-like."

Modbook Inc. CEO Andreas Haas built Modbook from the failed Axiotron, which had the same mission. Hass told Engadget that Axiotron failed in 2008 because it was largely bank-financed – in the middle of a financial crisis – by Lehman Brothers, which went bankrupt 10 days after Axiotron went public. "...there was just nothing that could be done about it," Haas was quoted as saying. Enter Modbook Inc, which has many of the same employees, and developed the current version of the machine. And the new machine is powerful.

The base line model includes an Intel Core i5, dual core, 2.5GHz chip and 8GB of RAM. It's also possible to upgrade the processor to an i7, dual core, 2.9GHz chip. Both include Intel's Turbo Boost feature. The Modbook's RAM is expandable to 16GB, unlike the Macbook Pro it's based on. Interestingly enough, the company claims that the 16GB option is energy saving, and drains 10% less battery power than the standard 4GB and 8GB offered with the Apple-built computers.

The Modbook's display carries a 1280 x 800 pixel display, just like the 13.3-inch MacBook Pro. Like MacBook, the Modbook allows the Intel HD 4000 chipset to deliver dual display and video mirroring – allowing Modbook owners to take advantage of the graphics card's full resolution of 2560 by 1600 pixel on an external display. It's also possible to setup the second display for pen use– for an additional cost.

Purchasing a Modbook immediately violates the Apple warranty on a MacBook Pro, something Modbook makes clear on its website. But, Modbook offers a one-year warranty on ModBook Pro components, as well as a one-year service plan on the base system. CEO Haas claims that the Modbook Pro hasn't provoked a negative response from Apple. In fact, Haas told Engadget, Modbook is an official Apple Developer, and the company's goal is to be a "... model citizen in the Apple environment."

The Modbook includes all the standard MacBook Pro inputs and outputs, including an Ethernet port, something that's extremely uncommon on Wi-Fi-enabled tablets. The Modbook does have one less USB 3 port that's used by the machine to connect the Wacom display. Modbook also chose to keep the DVD burning SuperDrive, which came standard with the mid-2012 MacBook Pro.

The body is made of aluminum, and weighs 5.4 pounds -- about three and a half times the weight of an iPad 4. The company also designed the ModBook to be propped "up to 50 degrees on all sides without slipping," according to its website. 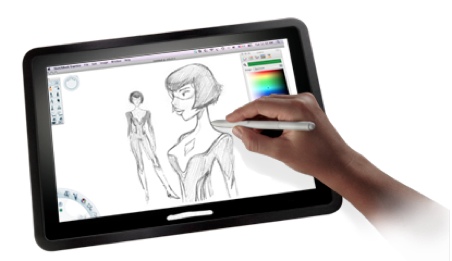 The Digitizer pen has two programmable side buttons, a digital eraser and 11 replaceable pen tips. It slides into a "pen garage" on the side of the Modbook and is kept in place by a magnet.

The Modbook Pro starts at a hefty $3,499 for the baseline model plus tax and shipping, which is about $50 for the cheapest option. A fully decked-out model can run a customer well over $5,000 plus additional costs. The top-of-the-line model includes a keyboard, as well as an uninstalled copy of Windows 7.

The Modbook Pro box also includes an 8GB USB thumb drive, a cleaning cloth and Modbook Pro system documentation. The company did not respond to BYTE when asked about cases or additional accessories. At the time of writing none are available on the website.

While several Windows pen-tablets exist already, this is the only commercially available OSX model BYTE discovered at the time of writing.