Nokia's first Windows-based tablet reaches the US this week with LTE in tow.

The two largest network operators in the US will begin selling the Lumia 2520 tablet from Nokia this week. The 2520 can connect to the LTE 4G networks of both operators and will be sold with or without a contract, depending on user preference.

The 2520 reaches Verizon Wireless first. It goes on sale Thursday, Nov. 21. The tablet's raw retail price is $499.99, but Verizon is offering it for $399.99 to those willing to sign a two-year contract. (Pro tip: Pay the full price and avoid a contract.) Verizon says the Lumia 2520 can be added to Share Everything plans for just $10 per month. Only the black model will be available in stores, but online shoppers can choose between black and red.

Nokia has not said when the noncarrier versions of the Lumia 2520 will go on sale.

The Lumia 2520 is Nokia's first foray into today's tablet market. The device features a 10.1-inch full HD screen with 1,920 x 1,080 pixels. According to Nokia, it has a super-bright mode that makes it easier to see outdoors, and it is protected by Gorilla Glass 2. The 2520 adopts the colorful design language used by the company's smartphones, and it will be offered in red, cyan, white, and black. The shells are made from polycarbonate and have smooth lines. 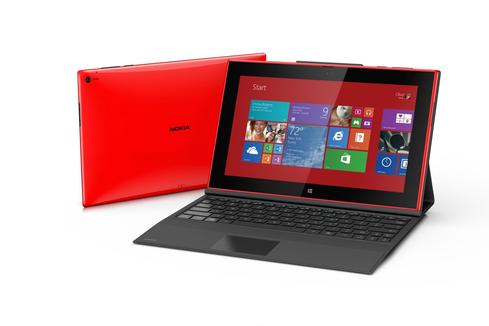 The tablet is powered by a 2.2-GHz quad-core Qualcomm Snapdragon processor and has 2 GB of RAM and 32 GB of internal storage. It connects to most wireless networks and offers a spate of sensors. The Lumia 2520 has a 6.7-megapixel main camera and a two-megapixel user-facing camera. The device runs Windows RT 8.1, not the full version of Windows. (This will likely be its biggest linchpin.) Windows RT can run apps developed for RT and WP8.1, but not full Windows apps. In other words, the Lumia 2520 is a competitor with Microsoft's own Surface 2.

The tablet market has kicked into high gear just ahead of the holiday season. Apple has released both the iPad Air and the iPad Mini. Microsoft has released the Surface 2 and Surface Pro 2. Amazon has released the Kindle Fire HDX, and there are innumerable Android tablets available. Fourth-quarter sales figures will be interesting to compare come January.

Consumerization 1.0 was "we don't need IT." Today we need IT to bridge the gap between consumer and business technology. Also in the Consumerization 2.0 issue of InformationWeek: Stop worrying about the role of the CIO (free registration required).

As well designed as the 2520 is, it is essentially yet another platform on which to put Windows 8 or 8.1. That isn't what Microsoft needs -- it needs a different solution altogether, either a different price point than most competitors or different technology. Otherwise there isn't any way for it to catch up to Android or iOS before some new major shift in the tablet landscape happens.
Reply  |  Post Message  |  Messages List  |  Start a Board

"Microsoft has released the Surface 2 and Surface Pro 2 ... Fourth-quarter sales figures will be interesting to compare come January."

Indeed, the 2520 isn't exactly the same as the Surface 2-- but they're pretty close, and the differences will become smaller once Microsoft ships the LTE version of the Surface 2 next year. The Lumia is cheaper than the Surface 2 if you're willing to eat the contract, but with the Nokia acquisition closing, Microsoft will have to balance two very similar devices, both of which are pitched at what has so far been a niche market.

Microsoft already faces strange competition in that its Surfaces compete with Windows devices from HP, Dell and other partner OEMs. But with the Lumia 2520, Microsoft is primed to face competition from itself-- which is stranger still. Then again, Microsoft might not care about Surface 2 sales if the total Surface 2-Lumia 2520 install base grows large enough to make Windows RT a viable platform. Hardware profits in the short term are a small concern compared to the longterm viability of the Modern UI.
Reply  |  Post Message  |  Messages List  |  Start a Board
InformationWeek Is Getting an Upgrade!