The LG Watch Urbane LTE smartwatch is the latest wearable from the company. This version adds features for making calls and sending messages, but LG ditched Android Wear to make it work.

Android Wear, the wearable platform from Google, doesn't support advanced functions, including LTE 4G and NFC. Those are exactly the two features LG has chosen in order to set the LG Watch Urbane LTE apart from competing models.

How did LG do it?

It dumped Android Wear in favor of its own smartwatch operating system.

LG revealed the Urbane LTE on Thursday, Feb. 26, which is itself a variation of the Watch Urbane launched earlier this month. Both wearables are high-class devices meant to appeal to the fashion- and style-conscious individual. They are round, made of high-quality materials, and have that timeless look common to nice watches.

The Urbane and Urbane LTE feature 1.3-inch P-OLED displays with 320x320 pixels, 1.2GHz Qualcomm Snapdragon 400 processors, 4 GB of storage, water/dust resistance, and numerous sensors. Where the Urbane has 512 MB of RAM and a 410mAh battery, the Urbane LTE has 1 GB of RAM and a whopping 700mAh battery (LG claims two-day battery life). They both include Bluetooth 4.0 Low Energy and WiFi, but the Urbane LTE adds LTE and NFC radios to expand the device's feature set. 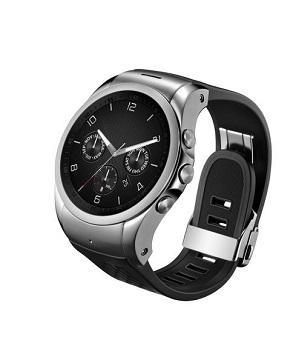 LG says the software features of the Urbane and Urbane LTE mostly mirror those of the LG G Watch R, such as the always-on ambient screen mode. The things that set the Urbane devices apart from the G Watch R, however, are the buttons. The G Watch R requires users to swipe through the user interface on the display. The two Urbane devices have three buttons placed on the right edge for accessing the Quick Setting menu, watch faces, and a "back" function. A long press of the bottom button activates a safety beacon (LTE model only), which will automatically dial a preset phone number and send the wearer's coordinates to that number.

The Urbane LTE takes things to the next level.

With the 4G cellular radio on board, the Urbane LTE doesn't need to have a smartphone nearby in order to perform. It can make and receive phone calls, send and receive text messages, update data-seeking apps, and even perform walkie-talkie conversations via push-to-talk. The NFC radio brings a virtual wallet to wearer's wrists. LG claims people will be able to pay for dinner and a movie by tapping their wrists on payment terminals. Good stuff.

[ Read about how Android is going to work. ]

This gels with a prototype device LG revealed back in January. That device, unnamed at the time, ran webOS. However, LG told The Verge that the LG Wearable Platform isn't based on webOS, and the Urbane LTE isn't the mystery prototype from earlier this year.

Yet another source at LG suggested "we wouldn't be wrong if we guessed [the LG Wearable Platform] was webOS." Draw your own conclusions. Any way you slice it, the Urbane LTE isn't running Google's wearable platform.

Eric is a freelance writer for InformationWeek specializing in mobile technologies. View Full Bio
We welcome your comments on this topic on our social media channels, or [contact us directly] with questions about the site.
Comment  |
Email This  |
Print  |
RSS
More Insights
Webcasts
Securing and Monitoring Networks in the 'New Normal'
ROI and Beyond for the Cloud
More Webcasts
White Papers
MPLS, SD-WAN and SASE
Zero Trust Evaluation Guide
More White Papers
Reports
2020: Threats in Review
The Malware Threat Landscape
More Reports

The LG watch is a really nice toy for those with the extra jack, but so far, I haven't seen any sufficiently compelling features to fork over my hard earned cash for one.  Perhaps one day when the tech matures. But it remains to be seen how useful it will be or whether it's even worth the money.
Reply  |  Post Message  |  Messages List  |  Start a Board
Editors' Choice
Hot Topics

10 IT Trends to Watch for in 2021 Cynthia Harvey, Freelance Journalist, InformationWeek,  12/22/2020
White Papers
MPLS, SD-WAN and SASE
The Network for Whatever's Next; A CxO Guide
What To Consider Before Renewing Your SD-WAN
The Trouble with Phishing
IDC Workbook: Best Practices for Cloud Security