The LG Lancet, which is expected to hit store shelves next week, also features a 4.5-inch LCD display plus Qualcomm's Snapdragon 410 --a quad-core, 1.2-GHz system on a chip (SoC) design.

The Lancet smartphone is available on Verizon Edge for $5 a month for 24 months. Users can also buy the phone for the full retail price of $120.

Customization is a core component of the phone, allowing users to "pin" the apps they use most, such as contacts, albums, maps, and office files, to the home screen for convenience.

The smartphone sports an 8-megapixel rear camera with multiple modes, including night mode, and a 2100mAh battery to keep it powered throughout the day. 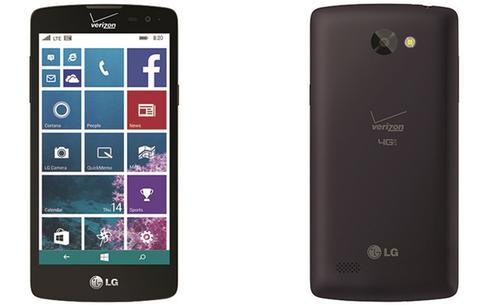 Other features include 8GB of internal storage, and the smartphone supports up to a 128-GB microSD card that is not included with the phone.

The Lancet is the first Windows smartphone on Verizon with HD Voice Calling, which is designed to refine and amplify call quality, and it also includes enhanced video calling technology.

The device comes pre-loaded with Cortana, a personal digital assistant, which can show users related articles based on their interests and includes features like GPS navigation and traffic alerts.

The Knock On feature lets users turn the screen on and off by double tapping it with a finger.

Verizon is offering a deal for a limited time in which consumers can bring their number to Verizon and get a $100 bill credit within two-to-three bill cycles for each new smartphone activated on Verizon Edge.

The Lancet joins a growing number of budget-priced smartphones, including Sony's Xperia E4 Dual, Huawei's Honor 4C, and Lenovo's A7000.

While Microsoft's market share for smartphones remains small, a December report from IT research firm Gartner suggests the overall market for smartphones is stable. The report found sales of smartphones to end users grew 20.3% to reach 301 million units, with Samsung and Apple's iPhone leading the pack.

[Read about the LG G4 smartphone.]

However, Microsoft is looking to reverse this trend with the release of Windows 10 Mobile. On May 14, the company released the most details yet about the new mobile operating system, which will offer its own Windows store, as well as universal Office apps for productivity on the go.

How this will eat into Apple's and Google's market share is still unknown.

Meanwhile, the LG's mobile division recorded a strong first quarter 2015, shipping 15.4 million smartphones, an increase of 26% compared with the same period last year, with sales up 5% from the first quarter last year.

Nathan Eddy is a freelance writer for InformationWeek. He has written for Popular Mechanics, Sales & Marketing Management Magazine, FierceMarkets, and CRN, among others. In 2012 he made his first documentary film, The Absent Column. He currently lives in Berlin. View Full Bio
We welcome your comments on this topic on our social media channels, or [contact us directly] with questions about the site.
Comment  |
Email This  |
Print  |
RSS
More Insights
Webcasts
Key technology trends in 2021 - Making these technologies work for your business
Nip Ransomware in the FUD: Detecting Attacks Pre-Encryption
More Webcasts
White Papers
Why Add Security to Your Skill Set and How to Do It
The Infoblox Q4 2020 Cyberthreat Intelligence Report
More White Papers
Reports
The State of Threat Detection and Response
The Malware Threat Landscape
More Reports

That certainly is an attractive price for a smartphone. It's less than what my daughter paid for the Blu brand.
Reply  |  Post Message  |  Messages List  |  Start a Board
Editors' Choice
Hot Topics

CRM Trends 2021: How the Pandemic Altered Customer Behavior Forever Jessica Davis, Senior Editor, Enterprise Apps,  2/18/2021
White Papers
Why Add Security to Your Skill Set and How to Do It
How Secure Are Your Endpoints?
Protection Strategies for a Cyber-Resilient Organization
Are We Cyber-Resilient? The Key Question Every Organization Must Answer
Stop Malicious Bots For Good: How Better Bot Management Maximizes Your ROI