The LG G5 is the most distinctive handset to grace the show floor at Mobile World Congress in Barcelona this year, with its stand-out modular design.

BARCELONA -- LG is not the first phone maker to try modular designs, but it is hoping to be the first to succeed with such a device. The G5, unveiled at Mobile World Congress Feb. 21, has a nifty removable rear hatch that accepts several different modules -- or what LG calls "friends."

The G5 and its friends are set to take the market by storm.

The company has long made me-too smartphones that feel like they were forever chasing the competition rather than leading it. The G5 changes that story. LG wasn't content to design just another slab and instead took a new direction.

It is the first smartphone from LG to truly adopt a metal chassis. The bottom of the G5, the entire area below the display, is removable. The first purpose of this design is to allow owners to access and swap the battery. The second purpose is to make the G5 compatible with accessories.

The first such accessory is a camera grip. The grip includes its own 1,200mAh battery, jog dial for zoom, and separate buttons for taking pictures and shooting video. The leather finish on the camera module also makes the G5 easy to hold. Another accessory is a DAC for audiophiles.

The DAC has its own signal processor and outputs sound at 32 bits. LG partnered with Bang & Olufsen to make this work, and the latter has special headphones to take advantage of the improved audio quality. LG says more friends for the G5 are on the way. 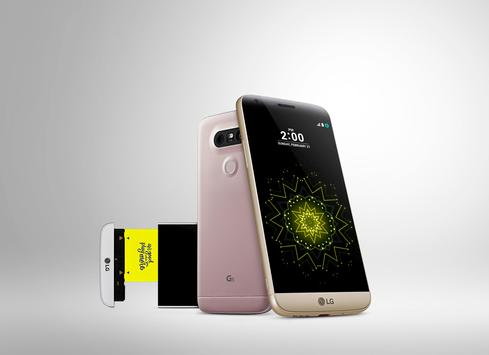 Even without the accessories the G5 impresses. The metal chassis is finely crafted and comes in four colors: Silver, titanium, gold, and rose. LG did a great job forming the glass around the metal frame and the entire phone fits together impressively. The aluminum is far more appealing that the cheap plastics LG typically uses.

The G5 also drops the rear-mounted buttons that have graced LG's G Series handsets for years. Instead, it relocated the volume controls to the side edge of the phone. LG says it made this change after user feedback made it clear the rear-mounted buttons were not popular. The screen lock button is still on the back and doubles as a fingerprint sensor -- a must-have security tool on today's flagship phones.

LG gave the G5 two cameras, but it can't shoot 3D pictures of video. Instead, the two-camera setup allows people to shoot regular and wide-angle photos. The main camera rates 16 megapixels and shoots with a 75-degree field of view. The secondary camera rates 8 megapixels, but takes much wider, 135-degree shots. The idea, says LG, is to let people take pictures of big things from close up.

The rest of the G5's specs are in-line with today's flagships. That means a Snapdragon 820 processor with 4 GB of RAM, 2,800mAh battery with rapid charging, quick LTE for wireless performance, and the latest operating system from Google.

It's not a perfect phone, but LG must be given credit for trying something out of the ordinary.

LG didn't stop with the G5.

While the camera module and DAC plug directly into the handset, LG created other friends for the handset that exist on their own. For example, a new 360 Cam shoots 360-degree video, which can then be consumed on LG's VR headset. Then there's the LG Rolling Bot, a home security/pet companion product that can turn on your TV remotely or chase the cats with a laser pointer. (No, I'm not kidding.)

The G5 will hit US carriers in April. LG said the 360 Cam and Rolling Bot are on deck for later this year. Pricing info is not yet available.