LG hopes the slick software features of the G Pro 2 will appeal to smartphone shoppers. The new phablet, announced Thursday, builds on the foundation set by last year's G Pro and G2 by bringing the advanced user interface of the G2 to the larger form factor of the G Pro. The G Pro 2 goes head-to-head with Samsung's Galaxy Note 3.

The G Pro 2 boasts a 5.9-inch full-HD display. LG slimmed down the bezel, which means more of the phone's front surface -- 77.2%, to be exact -- is screen. The phone is powered by the ever-popular Qualcomm Snapdragon 800 processor with four cores clocked at 2.26 GHz each. The phone has 3 GB of RAM, and will be offered in 16-GB and 32-GB variants.

LG stuffed a heavy-duty 1-watt amplifier in the G Pro 2, which it says produces 30% more volume that is also clearer and has more bass. LG didn't say if the device has stereo speakers.

Rounding out the hardware features, the G Pro 2 includes a 13-megapixel main camera and 2-megapixel front camera; HSPA+ and LTE 4G; Bluetooth 4.0, WiFi, and NFC; and a removable 3,200-mAh battery. The hardware tells only a portion of the G Pro 2's story, though.

[Is your BYOD program a help or a hindrance? Learn why BYOD Is Like Botox.]

LG developed a feature for the G Pro 2 called Knock Code. It represents an evolution of the KnockON feature that debuted in the G2. According to LG, Knock Code lets owners both power on and unlock the G Pro 2 by tapping on the screen with one of more than 86,000 knocking combinations. Knock Code, which requires at least two taps, can be used anywhere on the screen to wake the device. Since the G Pro 2's buttons are all on the back surface, this feature is important. Without it, owners would have to pick the device up to turn the screen on.

Beyond Knock Code, LG crafted a handful of new features for the G Pro 2's camera. A tool called Magic Focus lets users adjust focus and the depth of field after the image is captured. It mimics what a Lytro camera can do. LG tweaked the behavior of the flash to provide more natural lighting and white balance, and also added a unique "flash" that can be used when taking selfies. According to LG, the selfie flash shrinks the preview screen and adds a bright white light to the background to help illuminate the owner's face just a little bit better.

The camera also has a new burst shot mode and a collage tool that lets owners create slideshows and share them with social networks. 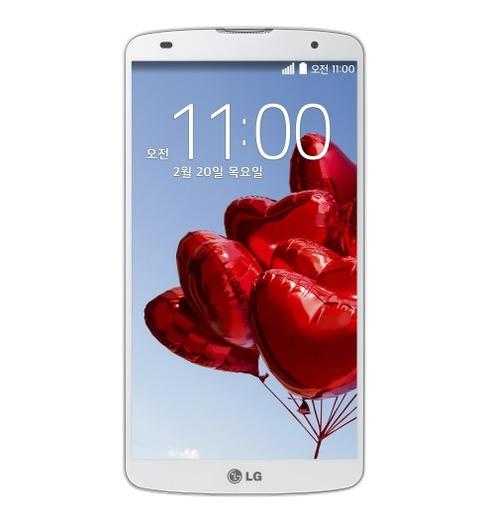 The camera records 1080p HD video and goes a step further with the ability to record 4K ultra HD. The 4K content can only be watched on 4K TV sets, though. Last, the camera can shoot video at 120 frames per second in full 1080p HD for high-def slow-motion footage. The slow-mo footage can be captured at half speed or one-fourth speed.

Other software features include Content Lock, which lets owners password protect files, photos, videos, and memos; Mini View, which shrinks the size of the display down to between 3.4 and 4.7 inches for easier one-handed use; and Dual Browser, which operates two active and visible browser tabs on the screen at the same time.

The LG G Pro 2 will be available in Korea first, with worldwide availability -- including the US -- following in April. Pricing details were not released.

Thanks for your comment. The G Pro 2 does not come with a stylus. The original G Pro did not have a stylus, either. LG has not developed apps for use with a stylus for any of its phones. Samsung has made it a point to create specific apps that use a stylus. I didn't mention the stylus in the article about the G Pro 2 due to LG's historic lack of support for the stylus.
Reply  |  Post Message  |  Messages List  |  Start a Board

LG may ape the Samsung..well everything but one thing they do not do is update their android. The LG Optimus G Pro was left at 4.1.2 with no plans to update. Samsung at least does updates to older phones. THe Note 2 got upgraded to 4.3 with plans to go to kit kat. LG notoriously abandons phones
Reply  |  Post Message  |  Messages List  |  Start a Board

You wrote an article and compared the LG to the Note 3. While I am sure you know that one of the primary reason people buy the Note 3 is stylus support, you failed to even touch on the topic in the article.

Does the LG have stylus support or does the absence of mentioning it mean it does not? Nothing like guessing.

Try to be thorough in your writing and remain relevant. Stylus support (not the rubber eraser type) is important to many people, especially those buying a phone with a large display. Samsung knows this and that is why they sell so many Note series phones. If LG doesn't include this support, then that is a rather glaring contrast don't you think?

The story was like reading an article about a car and the writer/reviewer failing to talk about whether the car used a gasoline, diesel or other type of engine. Hello?
Reply  |  Post Message  |  Messages List  |  Start a Board
Editors' Choice
Hot Topics