Google Glass costs too much and lacks killer apps -- and new technologies will soon make the original version seem wimpy. That's not bad news for Google.

Google Glass might be one of the most ballyhooed inventions to hit the consumer electronics space, but it still seems to be a solution looking for a home, or perhaps just an almost-ready product. I suspect that was Google's intent. Rather than making a full-blown commitment and big roll-out, Google eased Glass into the market with limited access and a high price.

That's unusual in the consumer electronics space, but I think, to its credit, Google played it right. As CES 2014 has just demonstrated, there are plenty of ideas for wearables around but a shortage of killer applications.

That's always the way with bleeding-edge technology. To succeed, electronic glasses need more than Glass is able to deliver. Obvious shortfalls include: a screen too small to display traditional images, a text orientation, weak voice recognition, and the ability to play video without providing screens over both eyes.

[What does the near future hold for Google's ground-breaking e-glasses? Read Google In 2014: 10 Predictions.]

One could argue that these choices are partly technical, and partly driven by a desire for business applications as opposed to entertainment, but the line between business and entertainment use is blurred and likely soon to disappear.

Technology is moving right along, stimulated perhaps by Google's pioneering and its stamp of approval of the approach. We are seeing stereo high-resolution glasses and products targeting niche markets, and it seems fair to say that e-glasses capable of all that a phone can do, but in optical stereo, is close.

These will find a ready market if they are reasonably priced.  The commuter will find them far more useful than a screen for watching movies, for instance, and this alone creates a viable market worldwide. Pair them with a remote control capability built on the user's phone (sort of like Chromecast) and browsing is easy, too. 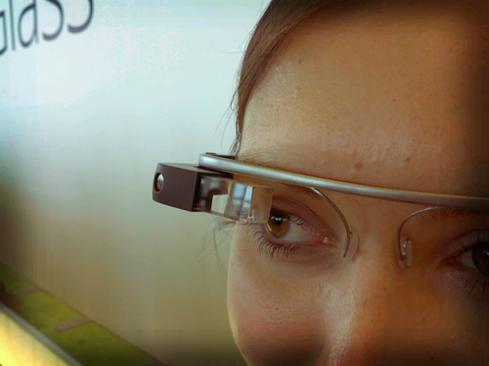 With vendors going the next step -- and that's a when-not-if thing in my opinion -- we'll have 3D capability in those glasses, and we are now in the realm of 3D games. It will add some new zest to Angry Birds. And of course links to all the gaming consoles will just extend that.

The new high-resolution 3D devices will flow into commercial applications, too, from artistic design to remote or robotic surgery. Again, we can see killer apps. The advent of cheap heads-up displays will profoundly change the way we do things, with interactions with sensors in the Internet of Things impinging on everything we do.  Imagine being able to leave an electronic note to tell the UPS man what to do with a delivery, and guiding him on his e-glasses to where to stow the package.

Does voice recognition still matter? There are applications and games where it is probably key to good operation, but no one wants to be continuously mumbling, "Next, next," when looking through a list of movies to watch. The answer in general is "yes" because there are applications where voice recognition adds value, but it's not a killer feature -- yet. That said, examples of voice searches with e-glasses to enhance shopping or tourism, find places, or get background information, spring easily to mind.

None of the offerings yet cover all the bases, but Google's patchwork of initiatives, including Chromecast, voice searching, and Glass, as well as its dominance via Android, are starting to look a lot more coherent. The Lego pieces are clicking together.

We can expect an integrated consumer experience from TV to tablet to phone to e-glass. Content will be easier to find, fed from a set of quality app stores like Google Play, and we will use voice or finger-swiping to get there.

I expect that deep in Google's Advanced Planning department, they are looking at how to handle all those Internet of Things sensors and put them into context with the rest of the electronics constellation. I, for one, will rejoice when I hear about the first person who says, "My e-glasses told me to go to the emergency room and prevented a heart attack." We live in interesting times.

Jim O'Reilly was Vice President of Engineering at Germane Systems, where he created ruggedized servers and storage for the US submarine fleet. He has also held senior management positions at SGI/Rackable and Verari; was CEO at startups Scalant and CDS; headed operations at PC ... View Full Bio
We welcome your comments on this topic on our social media channels, or [contact us directly] with questions about the site.
Comment  |
Email This  |
Print  |
RSS
More Insights
Webcasts
Take DevOps to the Next Level
Advancing the Hybrid Cloud & App Modernization Journey with IBM
More Webcasts
White Papers
2020 SANS Enterprise Cloud Incident Response Survey
The Top 5 Mistakes Everyone is Making in Vulnerability Remediation
More White Papers
Reports
Protection Strategies for a Cyber-Resilient Organization
Are Unprotected Cloud Databases Leaking Your Data?
More Reports

Glass itself will evolve. For example, the screen is too small, and competitors coming to market address that. Google will likely bring a different product out in their next phase.
Reply  |  Post Message  |  Messages List  |  Start a Board

Glass is already being evolved. I saw an article Friday in Popular Science that described a few competitors, all with unique new features.
Reply  |  Post Message  |  Messages List  |  Start a Board

But what would many people do if they wouldn't complain about every new device even before they can even put their hands on them, or before such device hits the market?

The price for Google Glass has been set at around $600. You can find them in the market by the second half of the year.

Google Glass 2 will be a lot richer. The production version will have learned a lot from the current development prototypes.
Reply  |  Post Message  |  Messages List  |  Start a Board

An Indy 500 driver who wants to know the temperature of his tires but doesn't want to stop to get out and touch them might find Google Glass displaying info. from a sensor quite helpful. Ditto for someone trying to get to a meeting at a new address. With voice commands, the map continues to unfold as needed. Or a manufacturing manager, trying to keep his eye on 12 gauges at once, would be happy to have them flash in succession through his Google Glass screen. There are countless applications for a device like Google Glass. We are just starting to reach the point where they can become practical.
Reply  |  Post Message  |  Messages List  |  Start a Board

I don't think there will be one killer app. There will be several really good apps for vertical markets -- and that will bring about a sizable amount of change for Google and its app developers. The military, healthcare, manufacturing, and logistics/inventory control are ideal for a tool like Glass. I still don't see them as a huge consumer success outside the tech-gee-whiz areas, but that's all right.
Reply  |  Post Message  |  Messages List  |  Start a Board

thanks, simon. Hands-free makes a lot of sense. I hope the voice activation is better than Siri!
Reply  |  Post Message  |  Messages List  |  Start a Board

I think Google's plan has been fairly straightforward: field-testing and data gathering. I expect that future iterations of Glass will be tailored to particular applications rather than the general-purpose, head-mounted Android device that Glass is today. Menu navigation, even with Google's simplified timeline metaphor, is too complicated and time consuming for a device that needs to respond more or less instantly.
Reply  |  Post Message  |  Messages List  |  Start a Board

The killer app for Glass is optical-character recognition and translation. There's already one app like that: Word Lens. And it will get better.
Reply  |  Post Message  |  Messages List  |  Start a Board
Page 1 / 2   >   >>
Editors' Choice
Hot Topics