Chinese manufacturers like Oppo, Xiaomi, and Huawei continue their strong performance, while Apple sees a double-digit slide in iPhone sales, according to the latest statistics from Gartner.

8 iPhone, iPad Apps To Jazz Up Your Presentations
(Click image for larger view and slideshow.)

Driven by demand for low-cost smartphones in emerging markets and for affordable 4G phones, the worldwide market for smartphones totaled 349 million units in the first quarter of 2016, a nearly 4% increase over the same period in 2015, according to a new report from Gartner.

However, the picture wasn't as rosy for Apple, which, while a market leader alongside rival Samsung, saw its first ever double-digit decline year-over-year, with iPhone sales down 14%.

Samsung led the market with nearly a quarter of marketshare, followed by Apple with 14.8% and Huawei rounding out the top three with 8.3% marketshare.

The report noted Samsung's success was due in a large part to the release of Galaxy S7 series phones and a renewed portfolio, which has positioned the company to be competitive in the wider market, as well as in emerging markets where competition is fiercer.

Despite Apple's notable slide in sales, the report noted the company's "upgrade program" in America had helped improve the pricing for its flagship iPhone 6s and 6s plus models, helping drive sales in its largest smartphone market. 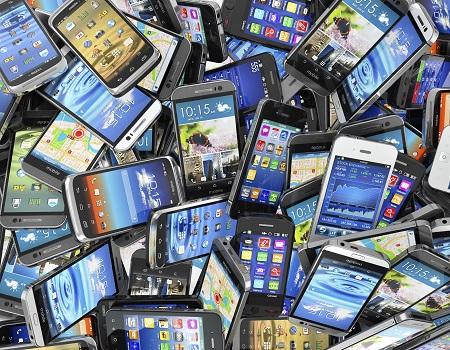 On the other side of the world, Chinese upstarts Oppo, with 4.6% marketshare, and Xiaomi, which claimed 4.3%, rounded out the top five. Oppo had the best performance in the quarter with unit sales growth of 145%.

The three Chinese brands -- Huawei, Oppo, and Xiaomi -- achieved 17% of the market, indicating Chinese brands are emerging as the new top global brands.

"In a slowing smartphone market where large vendors are experiencing growth saturation, emerging brands are disrupting existing brands' long-standing business models to increase their share," Anshul Gupta, research director at Gartner, wrote in the May 19 report.

Huawei saw strong smartphone demand in Europe, the Americas, and Africa, while Xiaomi saw sales rise 20% in the Asia/Pacific region. At the same time, Oppo's smartphone sales jumped a whopping 199% in the emerging markets of Asia, according to the report.

Oppo's performance was also strong in mainland China, where the company took marketshare from more established players such as Lenovo, Samsung, and Yulong.

Lenovo had another challenging quarter, with its worldwide smartphone sales declining by a third as the company disappeared from the top five smartphone vendor ranking -- as well as the top ten mobile phone vendor market -- in the first quarter of the year.

In the face of strong competition in China, Lenovo's smartphone sales fell by 75%. The report also noted the company's management is "struggling to bring synergies with Motorola's device business, managing lower costs and overheads of the two brands."

When looking at smartphone operating systems, Google's Android platform commanded just over 84% of the worldwide market, while Apple placed second with 14.8%, and Windows had just 2.4%.

Beleaguered smartphone maker BlackBerry, which has suffered an additional series of software and application setbacks this year, saw its marketshare cut in half, to a paltry 0.2% in the first quarter.

Overall, smartphone sales represented 78% of total mobile phone sales in the first quarter of 2016, although an earlier Gartner report predicted global smartphone sales would only grow 7% this year, with flat sales in China and North America.

Nathan Eddy is a freelance writer for InformationWeek. He has written for Popular Mechanics, Sales & Marketing Management Magazine, FierceMarkets, and CRN, among others. In 2012 he made his first documentary film, The Absent Column. He currently lives in Berlin. View Full Bio
We welcome your comments on this topic on our social media channels, or [contact us directly] with questions about the site.
Comment  |
Email This  |
Print  |
RSS
More Insights
Webcasts
What We Can Learn from Sports Analytics
Making Cybersecurity Work in Small and Medium-Sized Businesses
More Webcasts
White Papers
How to Prioritize Risk Across the Cyberattack Surface
The Insider's Guide to IP Geolocation Data During COVID-19
More White Papers
Reports
The Malware Threat Landscape
DNS Network Traffic Volumes During the 2020 Pandemic
More Reports

I knew it was just a matter of time for the Chinese to make smartphones that can compete with Samsung and Apple. It will be interesting to watch these three compete in the next couple of years. Hopefully, the prices will drop on smartphones. They are more expensive than a new mid-level laptop. I can tiny technology is expensive..
Reply  |  Post Message  |  Messages List  |  Start a Board
Editors' Choice
Hot Topics