With the expected debut of the iPhone 7 still half a year away, leaked photos purportedly showing the back of the smartphone have surfaced.

The rumor mill for Apple's latest iPhone is spinning again, this time with reports from the Japanese blog Macotakara that posted what it called leaked photos of the iPhone 7, and claiming Apple manufacturing partner Catcher Technology assembled the smartphone.

The photo shows the back of the device with a noticeably larger camera and three small white dots at the bottom of the handset, which could indicate the dock for Apple's Smart Connector technology.

The Smart Connector, which debuted with the iPad Pro, can transfer data and power, meaning that accessories don't need their own batteries.

The Japanese site also said the iPhone 7 would sport the same dimensions as the current model, and reaffirmed that the new handset would ditch the 3.5mm headphone jack in favor of headphones that connect through the phone's Lightning port, which is also used to charge the iPhone. 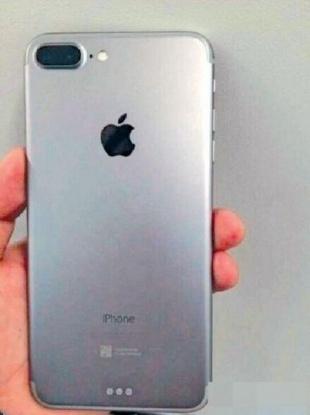 Alleged to be a leaked image of an iPhone 7.

Based on the photo of the smartphone, Apple has also decided to keep the raised camera casing instead of integrating it smoothly into the frame.

The blog also noted the presence of two sensors located at the top of the device, but said it was unsure about their function.

The iPhone 7 could also feature the same "glass sandwich" approach the iPhone 4 and 4s took, but with curved panels on the front and back instead of flat pieces, according to KGI Securities analyst Ming-Chi Kuo, who wrote in a March 25 research note that Apple may update the design of the next iPhone with a curved screen and new display technology.

Kuo added that the availability of supplies would determine whether Apple introduces a 4.7-inch LCD-based iPhone, along with a 5.8-inch AMOLED model, rather than 4.7- and 5.5-inch iPhones, each with an LCD.

On the audio side -- apart from Apple's controversial decision to dump the 3.5mm jack -- the company is reportedly collaborating with Beats Electronics, which Apple purchased for $3 billion in 2014, to develop completely wireless in-ear headphones that would come with a charger and be marketed as a premium accessory.

In addition to being completely wireless, the headphones could also feature noise-cancelling technology and a microphone that would allow users to communicate with Siri, Apple's digital concierge, or answer phone calls.

Pressure is growing for the tech giant to deliver a truly impressive leap forward with the iPhone 7. Industry veteran Walt Mossberg wrote in a March 23 article entitled "The iPhone 7 Had Better Be Spectacular" that Apple's new iPhones and iPads are very nice, but "don't break much new technology ground."

If it is to maintain its lead as "the best smartphone you can buy," Mossberg said, "Apple needs to impress big-time in the fall."

No matter how impressive, Apple is facing an uphill battle.

While smartphone unit shipments are expected to reach $55 billion in 2016, a 4% increase from last year, according to a report from the Consumer Technology Association (CTA), much of that growth will come from low-cost handsets targeted at emerging markets.

Nathan Eddy is a freelance writer for InformationWeek. He has written for Popular Mechanics, Sales & Marketing Management Magazine, FierceMarkets, and CRN, among others. In 2012 he made his first documentary film, The Absent Column. He currently lives in Berlin. View Full Bio
We welcome your comments on this topic on our social media channels, or [contact us directly] with questions about the site.
Comment  |
Email This  |
Print  |
RSS
More Insights
Webcasts
People Are The Most Important Part of Autonomous SOC
Don't Miss This Cybersecurity Virtual Event
More Webcasts
White Papers
How a Trading Floor Continues its Operations During COVID-19 Lockdown
Definitive Guide to Endpoint Privilege Management
More White Papers
Reports
Improving Security by Moving Beyond VPN
The Malware Threat Landscape
More Reports
Copyright © 2021 UBM Electronics, A UBM company, All rights reserved. Privacy Policy | Terms of Service