Apple fans are pre-ordering the new iPhone 6s and iPhone 6s Plus at a furious pace. Some supplies are selling out ahead of the Sept. 25 launch.

Apple began accepting pre-orders for the iPhone 6s and 6s Plus early Saturday, and the Apple faithful were quick to reserve their new precious. Initial demand for the larger 6s Plus was particularly strong.

"Customer response to iPhone 6s and iPhone 6s Plus has been extremely positive and pre-orders this weekend were very strong around the world," according to an Apple statement released Monday, Sept. 14. "We are on pace to beat last year's 10 million unit first-weekend record when the new iPhones go on sale September 25."

The 2014 iPhone 6 and 6 Plus were the first handsets from Apple to boast screens larger than 4-inches. This year's iPhone 6s and 6s Plus carry over their screen sizes and resolutions, but make significant improvements under the hood. For example, they add 3D Touch to the display, which recognizes subtle differences in pressure on the display for calling up secondary actions and menus. The camera resolution jumps to 12 megapixels and can capture 4K video, and the processor, LTE radio, and RAM have all been improved. 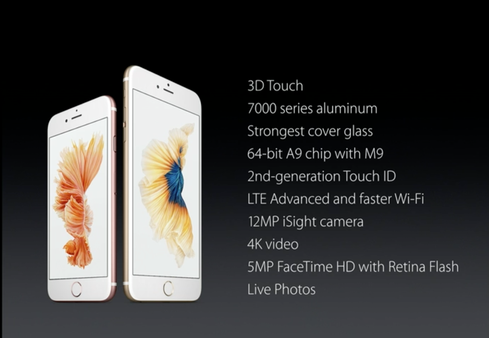 "As many customers noticed, the online demand for iPhone 6s Plus has been exceptionally strong and exceeded our own forecasts for the preorder period," continued Apple. "We are working to catch up as quickly as we can, and we will have iPhone 6s Plus as well as iPhone 6s units available at Apple retail stores when they open next Friday."

iPhone seekers on the East Coast looking to order a new iPhone early Saturday morning (~7 a.m.) were greeted with shipping times in the range of three to four weeks. The number of devices available for shipping and/or delivery on Sept. 25 sold through almost immediately. Orders placed Monday, Sept. 14, are still showing shipping times a month out. The gold and rose gold colors were most popular with online shoppers.

[What did Apple leave out of the iPhone 6s? Find out here.]

Alternately, Apple is allowing consumers to reserve the iPhone for in-store pick-up on Sept. 25. Many stores sold through their launch-day inventory of the iPhone 6s Plus, but have stock of the smaller iPhone 6s still available. This means consumers hoping to score the larger iPhone on Day One are out of luck.

What's unclear is how much stock will be made available to walk-ins who simply show up to Apple Stores on Sept. 25 seeking a new smartphone. On launch day, Apple typically first sells iPhones to those who place reservations. Once all the reserved handsets are accounted for, Apple begins allowing walk-ins to buy one. Walk-ins often leave empty-handed.

Apple Stores won't be the only place to score a new iPhone on Sept. 25. Apple's carrier partners -- AT&T, T-Mobile, Sprint, US Cellular, and Verizon Wireless -- will also be selling the iPhone 6s and the Plus on launch day. In fact, any carrier stores will open the same time Apple's own stores open, at 8 a.m. local time.

I think this is a clear indication that the market is evolving. With providers allowing installment plans that allows consumer to easilly upgrade, and that perhaps last year more folks switch to Iphones, things are looking pretty good for Apple.

Samsung had a similar experience with there latest roll out, so it's a head to head battle, to which consumers are benefiiting given the amount of flexibility that's provided (I mean providers will pay you to switch, can't get better than that)
Reply  |  Post Message  |  Messages List  |  Start a Board

I'm surprised as well. One of the reasons could be the name: 6s sounds similar to success, doesn't it? Well, actually I have no clue. I thought that these upgrades wouldn't draw huge crowds. But well, leave to the Apple fans to break the norm.
Reply  |  Post Message  |  Messages List  |  Start a Board

I normally wait for the next iteration to come out before upgrading. I got my wife an Iphone 6, I have an Iphone 5. The Iphone 6 had sufficient upgrades that it was worth the purchase. For this iteration it does have some bells and whistles, but I'm actually amazed that this is aimed to break last years sells.... a simple "Wow"
Reply  |  Post Message  |  Messages List  |  Start a Board

Given the rate at which Apple fans have purchased previous new releases of the iPhone, this is not very surprising. Not discounting the technological changes in the new device, one of the factors driving toward a record-setting pace is the near extinction of the 2-year contract. The new contract-less pricing options make it more palatable for any customer to upgrade when they want, as long as they are ready to shell out the cash.
Reply  |  Post Message  |  Messages List  |  Start a Board
Editors' Choice
Hot Topics