Apple is turning a consumer complaint into a money-making gambit by offering a sleek battery pack for $99 that doubles as a protective case. The new pack works for the iPhone 6 and iPhone 6s.

Apple has tacitly admitted the iPhone's battery life leaves something to be desired -- at least in the eyes of consumers -- and has offered a fix in the form of a $99 battery pack and protective case specifically designed for the iPhone 6 and iPhone 6s.

A soft microfiber lining on the inside helps protect the iPhone, while the soft elastomer hinge design helps makes it easier to put the case on and take it off again. The outside silicon finish gives it a silky, soft-touch finish.

Users can charge the iPhone and battery case simultaneously for increased talk time up to 25 hours, Internet use up to 18 hours on LTE, and longer audio and video playback.

With the Smart Battery Case on, the intelligent battery status is displayed on the iPhone Lock screen and in the Notification Center, so users know exactly how much charge they have left. 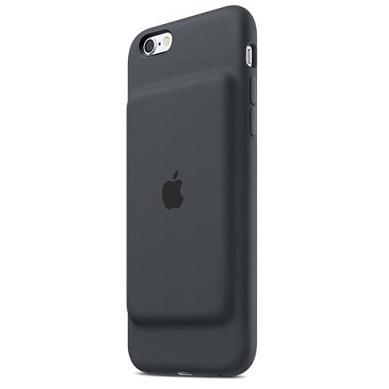 Better battery life has been a major complaint of iPhone users -- and smartphone users in general -- for many years.

A 2014 survey from RBC Capital Markets, which polled more than 4,000 consumers, found that what a third of them desired most from a new iPhone was better battery life, followed by a larger screen size.

While consumers got a bigger display with the launch of the iPhone 6 and the mammoth iPhone 6 Plus, battery life continues to be a sticking point. As Apple dedicates its design philosophy to producing ever-slimmer phones, the company is simply running out of room when it comes to power capacity.

Apple's head of design, Jonathan Ive, admitted as much in an interview earlier this year with the Financial Times, insinuating it's partly the consumer's fault that the iPhone needs to be recharged so often. "It's so light and thin that we use it so much and therefore deplete the battery," he told the paper.

Ive also noted that a thicker, more powerful battery would necessarily require the iPhone to be thicker and bulkier, therefore reducing its appeal by making it "heavier, more cumbersome, [and] less compelling."

The company did not change the specs for battery life when updating the iPhone 6s. The device has the same rated battery life as its predecessor.

[Read what people are saying about the anticipated iPhone 7.]

Despite quibbles about battery life -- and Apple's using what some consider a shortcoming to squeeze more money out of consumers -- people's enthusiasm for the device has not gone away by any demonstrable measure.

The iPhone 6s became the company's new sales champ, with 13 million units sold three days after its launch in September, due in part to the device's launch in China at the same time it debuted in the US and Europe.

However, in a KGI Securities research note written by analyst Ming-Chi Kuo and seen by MacRumors iPhone sales momentum could start to slide in 2016.

Nathan Eddy is a freelance writer for InformationWeek. He has written for Popular Mechanics, Sales & Marketing Management Magazine, FierceMarkets, and CRN, among others. In 2012 he made his first documentary film, The Absent Column. He currently lives in Berlin. View Full Bio
We welcome your comments on this topic on our social media channels, or [contact us directly] with questions about the site.
Comment  |
Email This  |
Print  |
RSS
More Insights
Webcasts
Making XDR Work in Your Enterprise - May 12
Data Center Network Operations (NetOps) Reimagined
More Webcasts
White Papers
Ransomware Security Breach Summary: Food Production
Ransomware Defense for Dummies
More White Papers
Reports
Intelligent Outcomes Are Key to Business Resilience
The State of Cybersecurity Incident Response
More Reports