2 comments
Comment Now
Apple is predicted to add an iPhone to its smartphone lineup on September 9. Here's the latest from the ever-churning rumor mill. 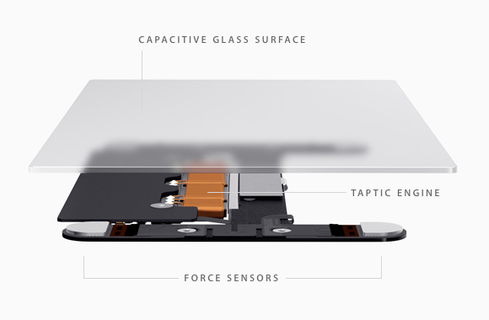 We first saw Apple's Force Touch technology in the newest Macbook lineup and the Apple Watch, and it looks like the feature will be included in the next wave of iPhones as well.

Force Touch technology can distinguish a light tap from a deep press, a feature made possible by the inclusion of a sensor that can recognize extra pressure. The ability to recognize differences in pressure could transform how iPhone users interact with their devices.

As iPhone users know, current devices let you tap, hold down, pinch, zoom and swipe to interact with the screen. Force Touch will let you tap then push down to unlock more features. There's a lot of potential for developers with Force Touch, and we're curious to see how Apple lets them use it to create new apps or enhance existing ones.

The above image depicts Force Touch technology as used in the trackpad of the new Macbook. According to KGI Securities analyst Ming-Chi Kuo on MacRumors, the Force Touch for iPhone hardware will be different and "use capacitive technology and thin FPC material to save space."

Nearly everything mentioned is pretty much what we're expecting to see... I want a real wishlist. :)

That's it for me in addition to a few things from the 'nearly certain' list, like 2GB RAM.

re: marketshare - just remember that 'sales' figures aren't share of the market. Just look at any metric of web-usage, ad viewership, or user-response and the idea that iPhones only make up 20% of the market becomes ridiculous. (My theory... there are a LOT of either un-sold, but 'shipped' Android devices, or a lot of them sitting in shoe-boxes somewhere.)

re: Apple TV - the big thing there would be a 3rd-party App-store capability. Aside from that, it doesn't even need an upgrade. (Does anyone actually care about TV subscriptions?)
Reply  |  Post Message  |  Messages List  |  Start a Board
Editors' Choice
Hot Topics