50%
Tweet
The first true teardown of Apple's iPhone 4, performed by UBM TechInsights, reveals its internal A4 processor and points the way to a related iPad slot that might soon host the handset's digital gyroscope.

In the first teardown to reveal all of the key components of Apple's iPhone 4, our sister company, UBM TechInsights, has found that the iPhone's 3-axis digital gyroscope is likely slated for the next generation iPad as well. TechInsights senior analyst Steve Bitton said there's an almost-perfect spot (4mm x 4mm; the exact size of the MEMS gyro) for it, located right beside the iPad's accelerometer.

The iPhone shares many components with the iPad, to the point where our sister site EE Times has opined that the iPhone 4 could be called an iPad Nano.

The gyroscope was one of several components which was expected to surface in the iPhone 4. The device is a boon to game developers, and, ultimately, to game players. Based on a die image capture, TechInsights has identified the device as the STMicroelectronics L3G4200D three-axis MEMS gyro. STMicro also provides the accelerometer (LIS331DLH) for both the iPhone and iPad.

TechInsight's senior analyst Steve Bitton speculated that the iPad will likely get the gyroscope for a number of reasons. First, the presence of the slot (see images) leads to the obvious conclusion. Moreover, the accelerometer and gyro would likely work together, as well as with the application processor (the processor right above those other two components). Thus having all closely co-located makes sense.

However, the pin-out on the iPad doesn't match that of the STMicro gyroscope, Bitton said. Instead, it more closely resembles the only other three-axis digital gyroscope on the market, from InvenSense (the ITG-3200). When Apple's iPad first came out, the InvenSense gyro was the only three-axis digital gyro on the market, so Apple may have designed its main board with that component in mind. Indeed, Apple could have included it in the iPad initially, but may have ultimately decided against using it in either device.

If the iPad is to get a gyroscope, it would appear that Apple will have the option of choosing the InvenSense gyro, or crafting a new main board with the STMicro gyro. That decision, Bitton speculated, may also be impacted by the amount of tweaking Apple has to do to its Core Motion API. Those are the APIs developers use to access all the motion sensing parts of the iPhone. Tweak the main board, or tweak the APIs. 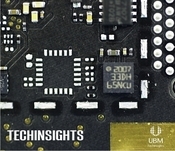 The iPhone 4, it turns out, shares many components with the iPad. Some, probably not a big surprise, like the Apple-marked A4 processor, featuring the 1-GHz ARM Corext A8 core (the iPhone 4 uses a version with twice the memory). Both the iPhone and the iPad also include Intel's 36MY1EF dual-memory package, featuring 128Mb of Numonyx NOR flash (these bear Intel's markings, according to TechInsights) and Elpida Mobile DDR SDRAM. Both include 256G-bit x8 Flash memory from Samsung and the Cirrus Logic-branded 338S0589 audio codec.

On the wireless side, Broadcom provides the iPhone 4 (as it does the iPad) with 802.11n wireless, Bluetooth 2.1 + EDR and FM receiver, and a single-chip GPS receiver.

UBM TechInsights has a long history of providing technology teardowns, and while there have been some unofficial teardowns of the iPhone 4, this one is the most comprehensive because it looks at all of the main components of the smartphone. The TechInsights report, led by analysts Steve Bitton, David Carey (VP of Technical Intelligence) and the teardown team in Austin, TX, uncovered a number of design wins, notably Skyworks Solutions (front end modules), TriQuint, AKM Semiconductor (a compass sensor), Texas Instruments (touch screen controller), Infineon (transceiver and baseband processor).

TechInsights also decapped the image sensors to reveal Omnivision as the manufacturer; the company matched the VGA resolution for Omnivision OV7675 and confirmed it by counting pixels. "The 5 megapixel image sensor is also an Omnivision part, and we are confident that this is the OV5650 color CMOS QSXGA image sensor with OmniBSI (backside illumination) technology," TechInsights said.