50%
Tweet
The Logitech Ultrathin Keyboard Mini is an excellent addition to any iPad Mini, which provides not only a proper typing surface but a stand and a protective cover.

Logitech's Ultrathin Keyboard Mini adds both a keyboard and a protective front to the newest member of the iPad lineup. The only thing that keeps it from converting my iPad Mini into a full-blown notebook is the limitations of the iPad itself (or, rather, iOS).

The Ultrathin Keyboard is aptly named. It's no thicker than the iPad Mini itself, so it doesn't add a great deal of bulk or extra weight to the Mini. It might make the Mini a little more difficult to insert into a close-fitting protective sleeve, for instance, but I haven't confirmed this. The back of the Ultrathin sports the same texturing and smoothness as the back of the Mini itself, so it maintains a consistency of design and feel when closed up.

The iPad mini rests at an angle in the Logitech Ultrathin Keyboard Mini (Click for larger image)
As with other covers for the Mini, the Ultrathin attaches to the Mini via a magnetic clasp and hinge. Close the keyboard over the face of the iPad, and it goes to sleep. The keyboard itself sleeps when not in use, although it has a dedicated power switch as well.

The hinge doesn't park at an angle the way a laptop's hinge does, so you can't prop the Mini on your lap with this keyboard. At least not when you have the Mini attached to the keyboard via the hinge: there's a magnetized slot directly in front of the keyboard you can park the Mini in. Too bad the viewing angle isn't adjustable there, though. It works well on a desktop, but not so well in one's lap or balanced on the knees.

If you're coming to the Mini from a full-blown desktop or notebook, obviously the size of the keys on the Ultrathin are going to take some getting used to. Large fingers need not apply, but despite that, the feel of typing on the Ultrathin is very comfortable. Logitech makes great keyboards — the solar-powered K750, upon which I am typing this right now, is easily the best keyboard I've ever used — and the Ultrathin is no exception. 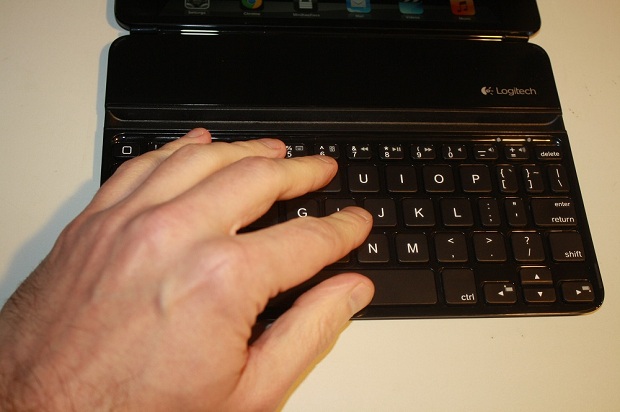 The Logitech Ultrathin Keyboard Mini is an excellent keyboard, but necessarily a bit cramped.

The Ultrathin isn't just a laptop keyboard shrunk to iPad Mini specifications, but has also been outfitted with iPad-specific controls. The square-icon button at the top left of the keyboard provides the same functions as the iPad Mini's own Home button: tap it once to bring you to the home screen, double tap it to open the app switcher, and long-press it to bring up Siri. Function keys let you access everything from the on-screen keyboard (should you need it) to the multimedia playback controls. I especially liked the way the Fn+arrow key combos let you select text onscreen.

What the Ultrathin can't provide you with is emulation of the kinds of behaviors on the iPad Mini that you might be used to from the desktop. E.g., the cursor keys only work when there's an actual cursor already placed onscreen via a touch action. If you're already used to the way

One annoying if ultimately minor design gripe: the Ultrathin doesn't use the same power connector as the iPad Mini itself. This would have been handy, since you could alternately charge the Mini and the keyboard from the same plug, without needing a second cable or adapter. That said, the Ultrathin uses a standard micro-USB plug, so if you already have one in your arsenal of cabling it should work as-is.

An excellent addition to any iPad Mini, which provides not only a proper typing surface but a stand and a protective cover.