50%
Tweet
Apple's iTunes Store has more than 140,000 apps just for the iPad. You can't try all of them, of course, but here are 10 hidden gems worth the effort. 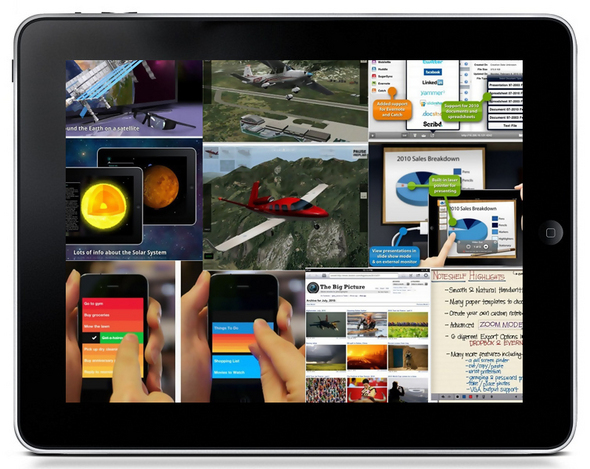 There's one thing iPad owners don't have to worry about: A shortage of apps designed specifically for their tablets. But which ones are good? And what makes a great iPad app?

Numerous pundits have opined on this topic since the iPad's debut three years ago, and the general consensus comes down to this: Less is more. A great app does a few things really well, but leaves out gratuitous features that aren't essential to the app's core functionality. After all, an iPad--or any tablet, for that matter--isn't a conventional PC and shouldn't try to match the PC's versatility. A quality app, rather, should strive to fill a particular niche.

Easier said than done. As hardware evolves, it invariably adds new features--and hence complexity. For instance, not long ago the cell phone exceled at two things: talk and text. But its modern descendant, the smartphone, has added dozens of capabilities, some of which are more useful than others. (Quick quiz, iPhone fans: How often do you use FaceTime video chat?)

The iPad is no exception in this complexity conundrum. Its original 2010 model, for instance, lacked front and rear cameras, which were added to the iPad 2 in 2011. The new iPad, as Apple dubbed the model released last week, boasts much better screen resolution and camera power, which may enable a host of new apps in areas such as HD video and gaming. (For more on the new iPad's features and how they stack up, see iPads Vs. Android: 3-Way Tablet Shootout. )

Augmented reality (AR) is another up-and-coming mobile app that would benefit from a better pair of iPad eyes. AR apps display computer-generated information over a live-video stream. One early example is Aurasma Lite, a free app that "augments" your real-world view with music, videos, and 3-D animations.

The limitations of the iPad's touch interface compel developers to devise innovative solutions. For instance, Tweetbot, a well-designed Twitter client, and Clear, a simple-yet-effective to-do list, both do a fine job of incorporating touch and swipe commands. (Click through this slideshow for more info on each app.)

In some cases, a "hidden" app may work better than its famous competitors. Or it may fill a gap, operating as a surrogate for a widely-used desktop program that has yet to migrate to the iPad. Example: Quickoffice Pro HD is a good alternative to the mythical iPad version of Microsoft Office, which may arrive imminently, according to persistent rumors.

Here are 10 hidden iPad gems you must try.

You forgot Note Plus App - a much, much better note taking app. It converts written text to type written text and even lets you record meetings. If there is one note taking app to have, this one is it. I've tried a few and I think this wins hands down. And no - I have nothing to do with the company. In addition, if you're trying to organize your thoughts, the iThoughtsHD is amazing.
Reply  |  Post Message  |  Messages List  |  Start a Board

"Has this ever happened to you? You're away from work--maybe in an airport or taxi--and want to scan a business card, receipt, poster, or some work-related paper that's within reach."