iPhone 4S owners who installed their iOS 5.1 upgrade may notice something else they weren't expecting: a signal indicator that shows they're now on AT&T's 4G network.

Apple's own release notes for iOS 5.1 in this regard were quite coy: they only say "Updated AT&T network indicator," with nothing specifically about 4G.

The truth is somewhat complex: users who connect to AT&T's HSPA+ network—which is closer to being 3.5G than 4G—will see the 4G icon. Because the connection provides 14.4 Mbps data, Apple calls it 4G, even if it isn't the same 4G LTE offered by Verizon. "4G" is not a technical specification, but a marketing term for the newest generation of mobile data networks.

A precursor to this arose last October, when a leaked internal AT&T memo hinted that the carrier was planning to work hand-in-hand with Apple to provide 4G-like speeds to iPhone users. (This was later confirmed to be correct.)

And at an iPhone event held that month, Apple's senior VP of worldwide marketing, Phil Schiller, talked about how the new dual-antenna system in the iPhone would allow for better call quality and faster speeds—"up to 14.4 Mbps down," he claimed.

"If you follow the phone industry, these numbers might sound familiar. 5.8 up, 14.4 down ... This [speed] is what the majority of our competitors claim when they talk about 4G performance."

But he went on to sidestep the issue of HSPA+ vs. 4G LTE: "We're not going to get into a debate in the industry what's 4G and what isn't; we leave that for others to talk about." 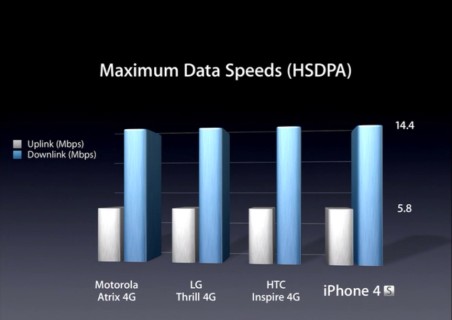 Apple also released figures claiming the iPhone 4S had twice the downlink speed of the iPhone 4, and speeds comparable to the HTC Inspire 4G and Motorola Atrix 4G. The Inspire is another of AT&T's HSPA+ 4G phones, so any comparison between the two is at least on halfway even footing.

What's less clear, though, is how the HSPA+-enabled 4S stacks up against genuine 4G LTE hardware and networks—which is where the real competition will be, especially as 4G LTE rolls out across a greater range of devices and shows off (among other things) LTE's much lower latency. 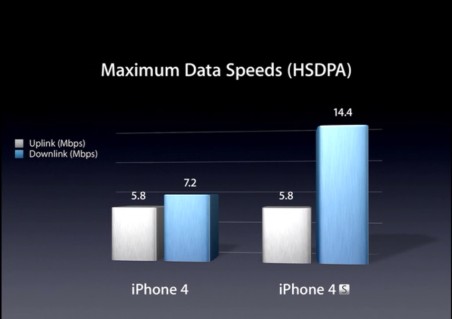