Tiny computers, real-time depth sensing, and breakthrough memory technology are among the innovations featured at this year's Intel Developer Forum. CEO Brian Krzanich detailed how connected devices will change the way we all do business.

12 Questions To Ask Before Accepting An IT Job
(Click image for larger view and slideshow.)

At the Intel Developer Forum (IDF) in San Francisco, Calif., on Tuesday, CEO Brian Krzanich said there's never been a better time to be a developer.

"I've never seen such diversity of opportunity for developers," said Krzanich during his keynote at the event.

That's not exactly a novel sentiment. In 2013, the Outcast Agency held a media event based on the theme "The developer is king." The event involved representatives from companies that depend on developers, such as Github, Google, Mixpanel, New Relic, and Stripe talking about why it's a great time to be a developer. That was also the message coming out of Twilio's Signal developer conference in May. The web, mobile platforms, and the cloud have all expanded the need for developers and the scope of their work.

If the idea isn't new, it has nonetheless helped Intel expand its horizons. Krzanich recalled how past IDF events followed a formula.

"For most of IDF's history, our mission was clear," said Krzanich. "We demonstrated the march of Moore's Law, previewed the next generation of Intel products, and showed our future Intel roadmap. It was a great formula, a simple one, and one that worked for a long, long time."

Krzanich has acknowledged that Intel is having trouble doubling chip performance every two years in accordance with Moore's Law. But there's another law that protects the company: Metcalfe's Law, which posits that the value of the network is proportional to the square of the number of users.

Though Krzanich did not invoke Metcalfe's Law during his presentation at IDF, he described a world of ubiquitous computing that cannot avoid it. As more and more objects gain computing power, through the addition of sensors, processors, and transceivers, the value of connectivity (and of the people who provide it) gets amplified by network effects. One connected car in a city isn't very useful. Ten thousand or 100,000 connected cars offer new traffic management posibilities. Add traffic sensors in the roads and clothing sensors for passengers and the possibilities proliferate. 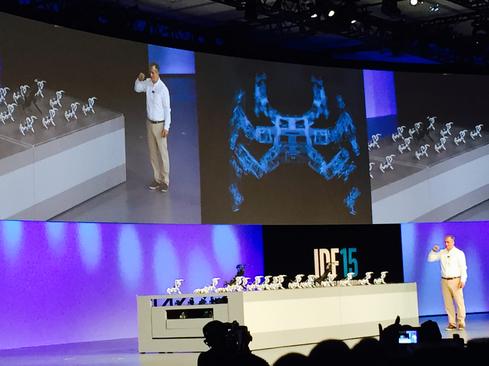 With an eye toward enabling possibilities like an army of arachnid bots that respond to gesture commands (pictured above), Krzanich made a series of announcements. He said that Intel and Microsoft have worked together to integrate Wake-on-Voice technology with Cortana, to allow Microsoft's virtual assistant to respond even when trapped within a sleeping computer. And he noted Intel has helped Google reduce audio latency in Android 5.0 Lollipop, a longstanding gripe among Android developers.

At IDF, Krzanich oversaw demonstrations of a variety of Internet of Things devices:

The advantage of devices such as the vending machine, said Krzanich, is that data gets sent to the cloud so the business owner can make improved decisions. "As you move across verticals, you can see that these end-to-end soultions provide an opportuntiy for the smart retail segment," he said. (As for the Nabi child abandonment sensor, perhaps technology isn't the optimal solution.)

There was a demonstration of Intel's Optane SSD, which will ship next year with the 3D XPoint non-volatile memory announced last month by Intel and Micron. The first public hardware demo of the technology showed that it performs 5x to 7x faster than the fastest SSD on the market, said Krzanich. Intel is also planning to ship DIMM modules based on 3D XPoint next year for its data center platforms.

Fashion brand Fossil Group plans to launch a line of Android Wear devices later this year. Greg McKelvey, EVP of strategy and marketing at Fossil Group, suggested all brands, including fashion brands, are looking for ways to integrate technology. At the same time, the absence of reliable Apple Watch sales figures leaves open the question of whether there's really a significant market for such devices.

Krzanich suggested that Curie could be useful to collect data about athletes at sporting events, among other things.

Intel's tiny Curie chip could also help win a developer, or team of developers, $1 million. Intel is working with Mark Burnett, from United Artists Media Group, and Turner Broadcasting to create a reality TV competition called "America's Greatest Makers." The show is scheduled to premiere next year. It will pit people who have made wearable and smart connected devices using Intel Curie modules against one another for a million-dollar prize.

Here's hoping someone builds a device that can disable video cameras.

Thomas Claburn has been writing about business and technology since 1996, for publications such as New Architect, PC Computing, InformationWeek, Salon, Wired, and Ziff Davis Smart Business. Before that, he worked in film and television, having earned a not particularly useful ... View Full Bio
We welcome your comments on this topic on our social media channels, or [contact us directly] with questions about the site.
Comment  |
Email This  |
Print  |
RSS
More Insights
Webcasts
Detecting and Preventing Insider Data Leaks
Hybrid Cloud: The Great Balancing Act
More Webcasts
White Papers
Trustwave Global Security Report
Accelerate Threat Resolutions with DNS
More White Papers
Reports
Accelerate Threat Resolutions with DNS
The State of DevSecOps Report
More Reports