The Huawei Mate 8 is the latest flagship phablet from the Chinese company. The device employs a new chipset and redesigned interface, and will debut in North America at CES in 2016.

Huawei took the wraps off its new flagship phablet -- the Mate 8 -- on Nov. 26 but the Android-based device is only available in China for now.

Huawei fans around the world will be pleased to know, however, that the release date for regions outside of China should be in the first quarter of 2016. North America will get a preview of the phone at the 2016 CES show in Las Vegas.

The 6-inch Mate 8 features a large 4000mAh battery, a full high definition (FHD) display with 1080p resolution, and an impressive display to body ratio of 83%.

The Mate 8 is the first smartphone to run on Huawei's recently announced Kirin 950 chipset and use TSMC 16 nm FinFET plus chip technology, according to the Android Central blog.

The architecture features redefined properties that are designed for more balanced power consumption, with four A72 2.3 GHz processors, and four A53 1.8 GHz processors. 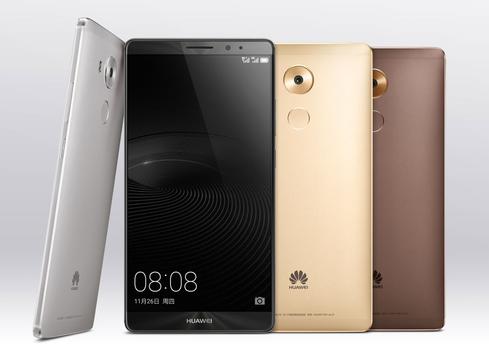 The handset will also come with a recently redesigned EMUI 4.0 interface from Huawei, which is likely meant to better integrate with the latest version of Android Marshmallow that will be packaged onto the Mate 8.

Its body is made from aerospace-grade aluminum and 2.5D curved diamond cut glass.

Users will be able to further personalize their handset with the choice of four colors, including Champagne Gold, Moonlight Silver, Space Gray, and Mocha Brown.

Shutterbugs will be happy to know the device features a Sony 16-megapixel rear camera and a front-facing camera with an impressive 8-megapixel capability.

Some of the Mate 8's other most notable features include voice controls, a power-saving firewall, a defragmenter and eRecovery, and the smartphone also offers improved roaming, navigation, and payment capabilities.

[Read about hot tech gadgets to watch this holiday season.]

Huawei, which now commands 7.7% of the global smartphone market, has continued its growth momentum, thanks to smartphone sales in both its home market and global markets and particularly Europe, where sales were driven by its ever-growing brand visibility.

The company recorded the highest growth in mobile phone and smartphone sales in third quarter of 2015 in a market which is being led by strong growth in emerging markets such as China.

Strong sales of the company's devices have also helped boost market share for the Android operating system, according to a recent Gartner report.

Global sales of smartphones to end users totaled 353 million units, a 15.5% growth over the same period in 2014, according to Gartner.

Nathan Eddy is a freelance writer for InformationWeek. He has written for Popular Mechanics, Sales & Marketing Management Magazine, FierceMarkets, and CRN, among others. In 2012 he made his first documentary film, The Absent Column. He currently lives in Berlin. View Full Bio
We welcome your comments on this topic on our social media channels, or [contact us directly] with questions about the site.
Comment  |
Email This  |
Print  |
RSS
More Insights
Webcasts
Zero Trust for a Work-From Home World
Nip Ransomware in the FUD: Detecting Attacks Pre-Encryption
More Webcasts
White Papers
Why Add Security to Your Skill Set and How to Do It
Balancing Hybrid Storage as Part of a Hybrid Cloud Data Management Strategy
More White Papers
Reports
Improving Security by Moving Beyond VPN
DNS Network Traffic Volumes During the 2020 Pandemic
More Reports

The number of 27 million in a quarter does not mean much. More meaningful number would be the number of global shipments. That would tell how BIG a global giant is Huawei in smart phones. On a similar note, "China Mobile is the biggest mobile company in the world". To this fact if we add another fact "China Mobile operates in only two markets: China and Pakistan". This changes the whole context.
Reply  |  Post Message  |  Messages List  |  Start a Board

I think Huawei new smartphones are really impressive.  I think if samsung doesn't provide new features, this brand will take over as the second most important Smartphone.  I think because China has a huge consumer population they can really reach large number of users.  I'm sure the Chinese government is using methods to promote their national companies over other which may be one of the reason such compay become number 3 quickly.
Reply  |  Post Message  |  Messages List  |  Start a Board

A greater amount of information will be required to make a fair comparison-- specifically the price of the Mate 8 will be needed as it is released across the world.

The Note 4 has a barometer, gesture, UV, heart rate and SpO2 sensors that are missing from the Mate 8. The Note 4 also provides 50GB of free cloud storage through Dropbox. On the flip side, the Mate 8 has a 4000 mAh battery vs. Note 4's 3220 mAh battery and a slightly larger screen. It all depends upon the price of the Mate 8 that will determine its competitiveness in the market.
Reply  |  Post Message  |  Messages List  |  Start a Board

But I probably would not rush ahead and buy this. I would like to check out reviews on EMUI running on Android M first.
Reply  |  Post Message  |  Messages List  |  Start a Board

That alone sounds so powerful. Feels Iron Man-ey. Other than that it has got probably more than what other flagships are offering. And thanks to Huawei's sell online policy on the Indian E-Retailer Flipkart has done really good for the company.
Reply  |  Post Message  |  Messages List  |  Start a Board
Editors' Choice
Hot Topics