The attractive HTC One A9 smartphone will ship with Android 6.0, or Marshmallow, but may look a bit too familiar to Apple's iPhone users.

HTC is taking another shot at the smartphone market with the One A9, a sub-flagship that hopes to compete on design and price more so than specs. The phone closely resembles the Apple iPhone, but HTC argues Apple is the copycat.

The One A9 employs several core HTC design principles. It features a unibody aluminum chassis with Gorilla Glass forming the face. The One A9 is slim, light, and classy thanks to high-quality materials. It makes marked changes from the One M9 due to its flat rear surface, rounded edges, and fingerprint sensor.

There's no questioning its HTC heritage. It's a bit of a shame, really, that the appearance matches the iPhone 6/6s so distinctly. The shape of the corners, design of the rear panel, and protruding camera module give the One A9 an iPhone-alike look that has the Internet howling. 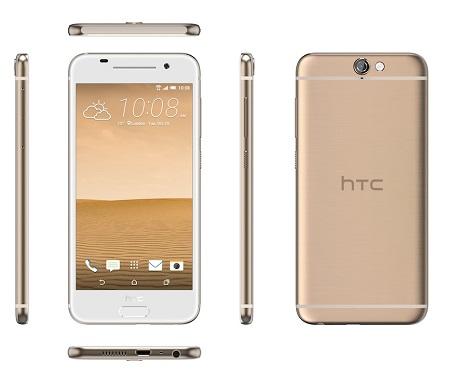 Appearance aside, there's a lot to say about the One A9. The screen measures 5 inches and has full HD resolution. HTC has shied away from overlarge phones for several years now, and has instead focused on making handsets that are easy to hold and use. The 5-inch screen gives the One A9 a more comfortable footprint for daily use.

The version of the A9 sold in the US will have 32 GB of storage, with support for memory cards up to 2TB (not that those exist yet). HTC likely saved a few dollars by selecting a 13-megapixel sensor, which is a drop from the 20-megapixel sensor on the One M9. The company continues to use an UltraPixel sensor for the front-facing camera. The One A9 is limited to capturing 1080p HD video.

HTC was smart to install a fingerprint sensor on the phone. The sensor is placed on front (unlike the back, as it was on HTC's 2013-era One Maxx). The fingerprint sensor does more than simply unlock the handset, and that's largely due to Android 6.0 Marshmallow.

[Would you like a smartwatch with that? Read Motorola Moto 360 Review: A Worthy Second Act.]

Android 6 natively supports fingerprint sensors, and in fact Google's new Nexus-branded devices include a tool called Nexus Imprint for managing the security of apps, mobile payments, and more. The One A9's fingerprint sensor is compatible with Android Pay, and can also be put to use in securing individual apps, folders, and files.

One feature the A9 has that the iPhone 6s doesn't? A reasonable price.

The HTC One A9 is already available for preorder and is expected to ship in early November. AT&T, Sprint, and T-Mobile will each sell the handset, too, with financing options available.

Eric is a freelance writer for InformationWeek specializing in mobile technologies. View Full Bio
We welcome your comments on this topic on our social media channels, or [contact us directly] with questions about the site.
Comment  |
Email This  |
Print  |
RSS
More Insights
Webcasts
What We Can Learn from Sports Analytics
The Failures of Static DLP and How to Protect Against Tomorrow's Email Breaches
More Webcasts
White Papers
Two-Factor Evaluation Guide
ROI Study: Economic Validation Report of the Anomali Threat Intelligence Platform
More White Papers
Reports
2020: Threats in Review
IDC FutureScape: Worldwide Digital Transformation Predictions
More Reports

Well I for one would like to gift it to somebody in my family. It's beautiful. The only thing I don't like is the HTC UI. It's hideous.
Reply  |  Post Message  |  Messages List  |  Start a Board

very smart to learn from the mistakes of others rather than having to commit them yourself.
Reply  |  Post Message  |  Messages List  |  Start a Board

Yes, copy its most successful competitor, using user feedback to guide the way for what to leave out, what to add.
Reply  |  Post Message  |  Messages List  |  Start a Board

Well, this is a mid market phone, it's not a flagship, so the price had better be lower. The specs are lower. But yes, it certainly does look like an iPhone. But with the shape of the button, and the placement of the camera, it also looks like a Samsung. What is a failing company to do other than to copy its more successful competition?
Reply  |  Post Message  |  Messages List  |  Start a Board

So they added penultimate features to keep the price down a bit. Interesting move and I look forward to see how this one does.
Reply  |  Post Message  |  Messages List  |  Start a Board
Editors' Choice
Hot Topics