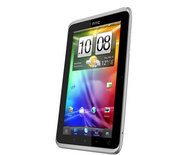 The tablet space has really heated up in recent weeks, with high-visibility devices announced by some of the world's leading tech companies. HTC finally jumped into the tablet market with the Flyer, a smaller, seven-inch tablet that sticks to a single-core 1.5GHz processor and disappointingly forgoes Android 3.0.

The Flyer offers mobile broadband via quad-band GSM/EDGE and tri-band 900/1700/2100 HSPA at 14.4Mbps. The presence of 1700MHz spectrum support nearly guarantees that the device will be offered by T-Mobile USA at some point in the future. It also packs the requisite Wi-Fi, GPS, Bluetooth 3.0+HS, and a bevy of sensors, such as a gyroscope, light sensor, and digital compass.

The Flyer includes two cameras. The main camera rates 5 megapixels with autofocus, but no flash. There is also a user-facing camera rated at 1.3 megapixels for video chats. The Flyer will be able to use Google's custom-made video chatting software over 3G and/or Wi-Fi.

It will ship with 32GB of storage in addition to a microSD slot for extra storage needs. It will have 1GB of RAM, and support for nearly all media file types. It weighs in at 415 grams, and has a 4000mAh battery.

The most stunning aspect of the Flyer is that it runs Android 2.4 Gingerbread. This would be a complete disaster were it not for the presence of HTC's Sense user interface. Sense -- thankfully -- saves the Flyer from being obsolete out of the gate. (How can HTC expect Android 2.4 to compete with all the Android 3.0 Honeycomb tablets hitting the market?) HTC put Sense to work solving a lot of the usability issues that come from using the non-tablet version of Android on a tablet-sized device.

Still, interacting with Sense on the Flyer made it feel overwhelming like a large smartphone rather than a small tablet. Android 3.0, as realized on the Motorola Xoom and Samsung Galaxy Tab 10.1, feels far more suited to the tablet form factor.

The few new pieces of software created by HTC include Scribe, a way to write on the device with a stylus, and Timemark, which enables you to capture the audio of a meeting in line with your written notes, so tapping on a word in your notes instantly takes you to that exact place in the audio recording of the meeting. HTC didn't talk about integration with other office tools.

Can HTC succeed with this device? Clearly, HTC is taking a first, cautious step while others are striding into the tablet market more boldly. The question is, which strategy will pay off?