50%
Tweet
HTC is making its Vive HR headset available for February preorder. Will virtual reality be the foundation for a successful future?

HTC is making its Vive virtual reality headset available for preorder on Feb. 29, as first reported by the Telegraph.

Further, HTC has decided to look beyond smartphones and place its focus on virtual reality, chairwoman CEO Cher Wang told the Telegraph. This reflects the company's "more realistic" approach, she said.

While smartphones remain significant, "to create a natural extension to other connected devices like wearables and virtual reality is more important," Wang explained. It's unclear whether this means HTC, which has been struggling in the mobile space, will leave the smartphone market.

The release of its Vive head-mounted VR display marks its first major milestone in becoming a virtual reality-focused company. Vive will reportedly begin shipping in April, but the company is starting 2016 by releasing another 7,000 developer kits.

[The hottest new smartphones and tablets we saw at CES 2016.]

Vive was developed in collaboration with game-maker Valve. Since the VR system was first announced, the partner companies have worked with partners to create VR content that spans industries, including automotive, education, health, and retail.

HTC announced a few new advancements for its Vive headset last week at CES 2016 in Las Vegas. The conference became a launchpad for Vive Pre, the second-generation developer kit for the VR system.

The headset has been redesigned for comfort, with a smaller frame and new strap for improved stability. Its inside has interchangeable pieces so it can be more easily adjusted for different facial shapes or people who wear glasses.

It has also been updated to include a new front-facing camera, which is intended to blend the physical and virtual realities. The idea is to let users view physical obstacles, or engage in conversation with other people, without removing the headset.

Vive's visual system has gotten a boost with more vivid displays and refined images. The "base stations", which follow the VR device as it moves, are smaller and quieter, and they provide more accurate tracking.

The Vive's controllers have also been updated with new buttons, grip pads, and overall better balance to give wearers greater control over the device. The controllers are powered by batteries that give four hours on a single charge and can be recharged via micro-USB.

The updated developer kit announced at CES 2016 will not be the Vive that hits the market later this year. While it's an improvement, HTC and Valve plan to release another version before it becomes generally available.

HTC isn't the only business prepping to put its VR technology on the market. The Oculus Rift became available for preorder last week. The headset will ship on March 28 for a price of $600. 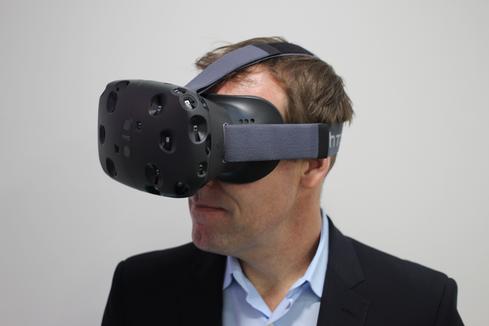 Pricing for the HTC Vive has not yet been announced, but industry watchers anticipate it will sell at a similarly high price. Like the Rift, it requires a gaming PC that can handle the demands of virtual reality technology.

More competitors are expected to enter the VR space as they refine their devices. HTC CEO Wang noted tech companies HP and Asus are prepping to debut VR-compatible PCs in months to come.

Virtual reality is a hot new technology we expect to continue evolving in 2016. In a study recently conducted by News Republic, one-third of 24,796 consumers claimed virtual and augmented reality will be the technology to watch this year.

Their belief was confirmed in the presence of VR and AR at CES, which was a hotspot for companies to demo new head-mounted displays. I had the chance to test a VR/AR product by uSens, a Silicon Valley startup that builds 3D hand gestures and hand tracking into its headset.

Kelly Sheridan is the Staff Editor at Dark Reading, where she focuses on cybersecurity news and analysis. She is a business technology journalist who previously reported for InformationWeek, where she covered Microsoft, and Insurance & Technology, where she covered financial ... View Full Bio
We welcome your comments on this topic on our social media channels, or [contact us directly] with questions about the site.
Comment  |
Email This  |
Print  |
RSS
More Insights
Webcasts
Virtual Event: The State of Cloud Security
5 Steps to Integrate SAST into the DevSecOps Pipeline
More Webcasts
White Papers
Cybersecurity Research: 2019 AWS Cloud Security Report
Securing Real-Time Communications for Dummies Book
More White Papers
Reports
Assessing Cybersecurity Risk in Today's Enterprise
The Definitive Guide to Managed Detection and Response (MDR)
More Reports

VR has a lot of potential, but I think that consumer VR is at least a few years away.

It's great to see a number of brand-name companies getting involved in VR, but I think a lot of that is a function of the PC market eroding and the smartphone market consolidating.
Reply  |  Post Message  |  Messages List  |  Start a Board
Editors' Choice
Hot Topics