HTC's updated One smartphone delivers a stunning design with an all-metal skin, 5-inch display, and powerful camera. Where does that leave Samsung and Apple?

HTC unveiled an update to its One flagship smartphone at an event in New York Tuesday. It ramps up the appeal of last year's One smartphone in such a way that competitors might need to go back to the drawing board.

One word that HTC used over and over again during its announcement was "design." The company believes strongly in producing thoughtful, well-designed products that elicit joy and satisfaction from their owners. The new HTC One (same name as last year's model) uses more aluminum in its minimalist design, and the metallic skin wraps completely around the back and side edges. The One is offered in three colors: dark gray, silver, and gold, but the materials are the same in all three.

This new One has a larger display at 5 inches across the diagonal, with 1920 x 1080 pixels for full HD resolution. The Super LCD 3 panel is bright, colorful, and sharp. The One is one of the first smartphones to ship with the Qualcomm Snapdragon 801 processor onboard. It has four 2.3-GHz cores with 2 GB of RAM. The One will ship with either 16 GB or 32 GB of internal storage, but only the 32-GB model will be sold in the US. The One supports microSD cards up to 128 GB, meaning it can hold up to a combined 160 GB of data. That's more than many tablets.

HTC has done something novel with the camera. Like last year's phone, the camera rates 4 ultrapixels. HTC says the pixels on its camera sensor are bigger than normal sensors and let in 300% more light for improved low-light performance. The main sensor is joined by a 2-megapixel secondary sensor, but this sensor does not capture images. Instead, it records point-of-view information and assists with focus. This additional camera element lets HTC add some fun editing effects that include 3D images and the ability to adjust depth-of-field on a whim. The One also features a 5-megapixel user-facing camera for selfies. It even includes a Selfie shooting mode for owners who love themselves as much as their phone. 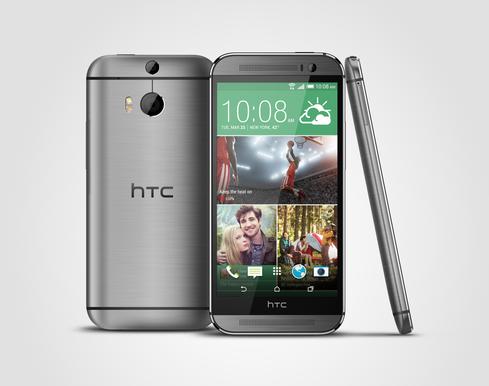 The One features the usual spate of expected smartphone specs. It includes NFC, Bluetooth 4.0, dual-band WiFi, GPS, and support for worldwide 3G and LTE 4G networks. It takes advantage of Qualcomm's Quick Charge 2.0 for 75% faster charging (with the right power adapter), and includes an IR transceiver for controlling home theater equipment.

The One's user interface has been updated to Sense 6.0. Though Sense 6.0 carries over many of the features and tools found in Sense 5.0, it makes changes to BlinkFeed (HTC's social news reader), the homescreen panels, and other system-level tools. HTC said the One has a "Sixth Sense" -- a not-so-cute play on words -- that builds in some gesture functions to prepare the device for certain actions. For example, if you pick the phone up and knock on the screen twice, it will wake the lock screen and show you the clock and notifications. Knock twice again, and it will go back to sleep. The One will also automatically answer calls when the device is lifted to the owner's ear, as well as launch the camera when it's tipped on its side joined by a press of the volume button. It's not reading your mind, but HTC claims it is anticipating your needs.

The One will be sold worldwide very soon. The full retail price will be $649. Pricing at the register will fall between $200 and $250, depending on the carrier, and financing options will surely be plentiful.

HTC did an incredible job with the One. It may offer the same feature set as competing devices (LG G2, Apple iPhone, Samsung Galaxy S5), but the hardware is superior to nearly every other phone in the market today. The One makes a much stronger first impression than Samsung's Galaxy S5. HTC assured people that it won't have the same supply problems it did with last year's phone, and it may even beat Samsung to retail shelves -- and consumer pockets.

Eric is a freelance writer for InformationWeek specializing in mobile technologies. View Full Bio
We welcome your comments on this topic on our social media channels, or [contact us directly] with questions about the site.
Comment  |
Email This  |
Print  |
RSS
More Insights
Webcasts
Building the SOC of the Future: Next-Generation Security Operations
ROI and Beyond for the Cloud
More Webcasts
White Papers
The Network for Whatever's Next; A CxO Guide
The Insecure State of Microsoft Teams Security
More White Papers
Reports
Are Unprotected Cloud Databases Leaking Your Data?
Special Report: Edge Computing: An IT Platform for the New Enterprise
More Reports

It's just cruel to come out with nice upgrades when the contract upgrade cycle is two years. Hmm, wonder what AT&T will pay on trade-in for last year's model ...
Reply  |  Post Message  |  Messages List  |  Start a Board

I currently have an HTC Inspire. All good except the camera sucks. It's the worst which is why I'm shopping. But what to buy? Will this new HTC One really be a great camera that happens to be a phone? This is why I was considering Nokia Lumia but not thrilled with Windows platform. So then I figured I'd bite the bullet and get an iPhone 5s. I know nothing about the new Samsungs. Now this new ONE?  What to do?!?!  I use my phone mostly for photos, uploading them, texting. Sometimes I actually talk.
Reply  |  Post Message  |  Messages List  |  Start a Board

"...Non-removeable battery." That's a dealbreaker for a lot of Android users, guy. You can neither replace the battery yourself, nor ensure that your phone is off.
Reply  |  Post Message  |  Messages List  |  Start a Board
Editors' Choice
Hot Topics