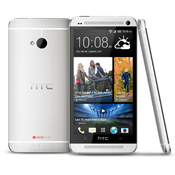 HTC One
HTC unveiled its flagship device for 2013, called the HTC One, on Tuesday. This new device is a huge step forward for HTC in terms of hardware and software, as HTC hopes to better compete against Goliaths Apple and Samsung.

The One is made from milled aluminum that HTC says features "zero-gap construction." Essentially, HTC stuffed plastic firmly into any surface that isn't covered by metal. It features a dazzling 4.7-inch 1080p HD display. The result is a pixel-dense LCD panel that looks gorgeous and outclasses Apple's Retina Display by a mile.

The One is powered by a four-core Qualcomm Snapdragon processor, with each core rated at 1.7 GHz. The processor is paired with 2 GB of RAM, and the One will be available in 16-GB and 32-GB versions.

Evident on the front of the device are two speaker grilles, which HTC says deliver crisp, clear stereo sound. HTC loaded a separate amplifier combined with Beats Audio technology to create "Boom Sound" in the One.

[ Are smartwatches the next frontier in the mobile device wars? See Apple iWatch Vs. Smartwatches Past And Present. ]

Perhaps the standout feature is the 4-megapixel camera. Rather than go for a huge megapixel count, HTC reduced the megapixels, but made them much larger. According to HTC, the One's camera collects 300% more light than a competing 8-megapixel sensor. This new imaging sensor is paired with software called Zoe (pronounced "zooey"). This software essentially records video and still images at the same time and then auto-magically combines them to create unique media for sharing. There are some powerful editing features that allow users to edit out people/objects, as well as combine multiple images into miniature vignettes.

Beyond the hardware, software is where HTC evidently focused a lot of its development efforts. HTC's new "Blink Feed" is the most important innovation. In short, it is a content aggregation service that delivers information to the One's home screen. The content can be pulled from 3,000 varied sources, including ESPN. The result is a live, changing home screen that updates the news and shows what the user's social networks are doing. Blink Feed is a part of HTC Sense 5.0, which is a complete re-imagining of HTC's user interface skin.

Other features include HTC SenseTV, which lets users control their set-top box though a built-in infrared blaster.

The One will be sold by AT&T, Sprint and T-Mobile USA in the U.S. There's no word from Verizon Wireless on whether or not Big Red will offer the One, too. It will support various LTE networks worldwide, and is expected to launch on more than 80 carriers. None of the carriers have said exactly when the device will go on sale, nor how much it will cost, but separately, HTC said it would be available by late March.